I love Star Wars for so many reasons and one of those reasons are the lightsaber duels. When I was a little girl I remember watching Revenge of the Sith and The Phantom Menace and then taking my Star Wars toys and remaking those lightsaber battles in my own little way. It was so much fun to not only watch but to also reenact. And then I got a little older and I finally saw the original trilogy and those lightsaber battles were less flashy but all the more incredible. That’s why when Rogue One was coming out I was a little worried, I’m not gonna lie. The thought of a movie with no lightsaber duels seemed bogus. Thankfully the film didn’t need one because it was that good.

Now, when I wrote this post last year it was all about lightsaber duels but after The Last Jedi my idea of what a duel is had to be updated and so here is the new version of that post.

15. The Attack of the Clones: Escaping Geonosis

This is hands down the worst lightsaber duel out of all of the Star Wars films. The duel between Obi-Wan and Count Dooku is okay. It’s when Anakin joins the party that it starts becoming ridiculous. Who decided let’s let Anakin cut off the power and have a slow motion fiasco of a red and blue lightsaber flashing by the camera while all you can see is the two duelers’ faces in the shadows? That’s so dumb! And then after that terrible duel comes super CGI Yoda ready to tangle with the former Jedi, Count Dooku. It’s laughable watching them hurl fake rocks at each other, throw lightning, and then finally start fighting with their lightsabers. I don’t know how many times Yoda flips in that one sequence but it’s very, very annoying to behold. In fact, the last time I watched it it was so bad that I vowed never to watch The Attack of the Clones again. That’s how terrible it was.

13. Revenge of the Sith: Rescuing Palpatine

This duel is very bland. There’s nothing very special about it, only this time Anakin isn’t acting as rashly and Count Dooku comes to a rather dismal end.

12. Revenge of the Sith: Mace Windu Vs. Palpatine

This lightsaber duel is okay. There’s nothing overly incredible about it. Palpatine flipping like Yoda takes some point off of its epicness. And it ends very, very terribly with Mace Windu’s agonizing death. The only thing that makes this duel exciting is watching Mace Windu handle Palpatine with ease. If not for Anakin things could’ve been a whole lot different. It’s a shame.

11. Revenge of the Sith: Obi-Wan Vs. General Grievous

I actually like this duel despite its briefness. I mainly enjoy the beginning when General Grievous begins by spinning his four lightsabers. Have you ever watched that part in a dark room? If you haven’t all I can say is it’s an amazing experience watching the rapidly flashing blue and green colors light up the room. 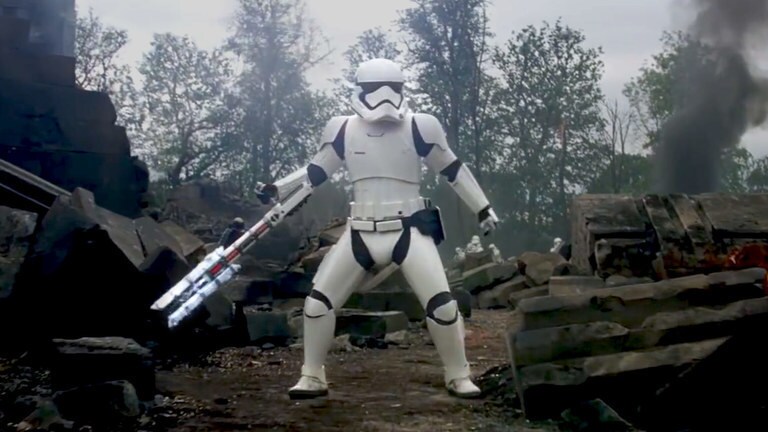 One of the best scenes of The Force Awakens is when Finn duels his former stormtrooper comrade, FN-2199. It’s an awesome scene because it’s the first time I ever saw a stormtrooper with a close-combat weapon and to see him fight Finn who was wielding a lightsaber was downright EPIC! This is undoubtedly one of the best duels in Star Wars.

9. Return of the Jedi: Luke vs. Darth Vader

I love this lightsaber duel. Return of the Jedi isn’t one of my favorite Star Wars movies but every time I do watch it I urge myself to get through the Ewoks just so I can get to the good stuff at the end of the film. And this duel is worth the wait. I love watching Luke fighting Darth Vader with all that rage (ha, I sound like Palpatine.) He had already lost the only family he knew back on Tatooine and then to find out Darth Vader was his father was one of the worst surprises in his life. And then he found out that Leia was his sister. She was as precious to him as anything and the last thing he wanted was for her to become as evil as his father. That’s why he went plum off.

Another reason I love this duel is the music. It’s dark and heroic all at once. It’s really John Williams at his best.

8. Revenge of the Sith: Yoda Vs. Darth Sidious

7. The Last Jedi: Aboard the Supremacy

Ever since I saw this duel in the trailer I was super excited to see it and after watching the movie I am happy to say it didn’t disappoint. Now was it as epic as I thought it could’ve been? Not exactly. I felt that the duel was shorter than expected and that it didn’t slightly live up to the hype that I thought it would but it’s still one of the best duels in Star Wars and I’m glad it’s part of this collection.

6. Revenge of the Sith: Anakin Vs. Obi-Wan

Wow, I didn’t even realize how many lightsaber duels there were in the Revenge of the Sith. This is I think the fourth one. That’s astonishing. Well anyway, back to the ranking. Revenge of the Sith isn’t the best Star Wars movie ever made but this climactic duel is worth the wait. I love this lightsaber fight. I love Mustafar, I love the fanciness of the choreography, I love the music, I mean it’s pretty much perfect. If Anakin wasn’t so annoying then it might be my second favorite duel.

5. The Last Jedi: A Fateful Meeting

I had hoped there would be a duel between the Jedi Master Luke Skywalker and his villainous nephew, Kylo Ren, but I definitely didn’t expect it to actually happen. When they stood on the sands of Crait facing off against each other I was practically beaming with joy. And even though their sabers never actually touched that’s mainly the reason why the duel was so special. We all know about the classic lightsaber duel but it’s always exciting seeing new things and Rian Johnson provided that in quantities.

It’s also one of the better duels in Star Wars because of its undoubted impact on Episode IX going forward and honestly, anything to do with Luke Skywalker and a lightsaber is going to be epic.

4. The Phantom Menace: A Duel To Remember

This is such an amazing duel. I have to admit, George Lucas was going on the right track when he made The Phantom Menace, excluding Jar Jar Binks. Darth Maul was such a menacing, convincing villain and this lightsaber duel was perfect in every way. The martial arts style of Darth Maul versus the calmer more controlled fashion of the two Jedi is so much fun to observe. I really wish Darth Maul could’ve lasted for at least one more movie because he just was that cool.

3. The Empire Strikes Back: Duel on Cloud City

This is the classic trilogy at its best. Not only does this duel between Luke and Darth Vader lead to one of the biggest reveals in cinema history but it’s simply a visually appealing duel. From the fight in the carbonite chamber to when they’re on the bridge in the inner area of Cloud City, it’s beautiful. And the choreography is simple but very fluid and realistic. There aren’t any unnecessary moments that diminish the duel whatsoever. My words to describe this duel is, “Impressive, most impressive.”

2. The Force Awakens: The Battle on StarKiller Base

It was very difficult figuring out where I was going to rank this duel out of its previous four predecessors because I love them all but when I really thought about it I realized this duel has become one of my favorites out of all of the others and this is why.

First of all, I love the setting. The darkness from the lack of sunlight, the snow, the trees, it’s pretty epic. Secondly, the significance of the two duels between Finn and Kylo Ren and Kylo Ren and Rey left such impacts leading forward into The Last Jedi. And third, I absolutely love the choreography.

When The Force Awakens was coming out I remember wondering how fancy the lightsaber duel was going to be because it seemed like modern lightsaber duels were designed to be quick and pretty to look at. This duel was everything but pretty and that’s why it was so awesome.

Finn barely knew how to use a lightsaber so the choreography couldn’t be too fancy. And Rey knows quite a bit about using a close-combat weapon but her skills with a lightsaber are limited too. Kylo Ren was the only individual who had trained to use the ancient weapon, so of course, his fighting style was the prettiest of them all. The duels were was so grounded and realistic that I came away from that movie theater wanting to see it again and again and again.

1. The Last Jedi: The Battle of All Battles

Okay, I know I’ve said it a million times but this battle sequence was OFF THE CHAIN!!!! It’s been nearly three months since I’ve seen this epic battle and I’m still losing my mind over it. This scene was not only amazing visually but the choreography was beyond incredible as well. The Praetorian Guards might not have had lightsabers of their own but their skill sets were undoubtedly impressive and made for the best duel I have ever seen.

This was also a great scene because it teased the alliance of Rey and Kylo Ren and it was absolutely magical to observe. Watching the two Force Wielders fight the Guards together and help each other throughout the battle was beautiful and one of the coolest things I have ever seen in cinema period. If there is a duel in Episode IX that’s better than this I’m probably going to have a slight conniption, that’s how excited I’ll be.

So, that’s my ranking. I thank you for reading this post that I’ve had such a blast writing and I hope you have a wonderful day. May the Force Be With You.

4 thoughts on “The Fifteen Best Duels in ‘Star Wars’: Ranked from Worst to Best”