If you’ve read my blog you will know that I’m a HUGE Darth Vader fan. I’m such a Darth Vader fan here’s a real life account of my only encounter with the super awesome dark lord of the Sith. I was at Disney World about five years ago, before The Force Awakens even had a cast, or a title, and I went to the park, Hollywood Studios. I went to ride the attraction, Star Tours, and while I was standing in line a troop of stormtroopers appeared out of nowhere. Now I was already excited to see real life stormtroopers but then Darth Vader walked out and I literally squealed like a fan girl. I couldn’t believe it. He walked like Darth Vader, he looked like Darth Vader, it was DARTH VADER!!!! That is one of the best memories of my life.

So yeah, I’m a Darth Vader fan and today I’m going to share with you all of his Greatest Moments. Enjoy! 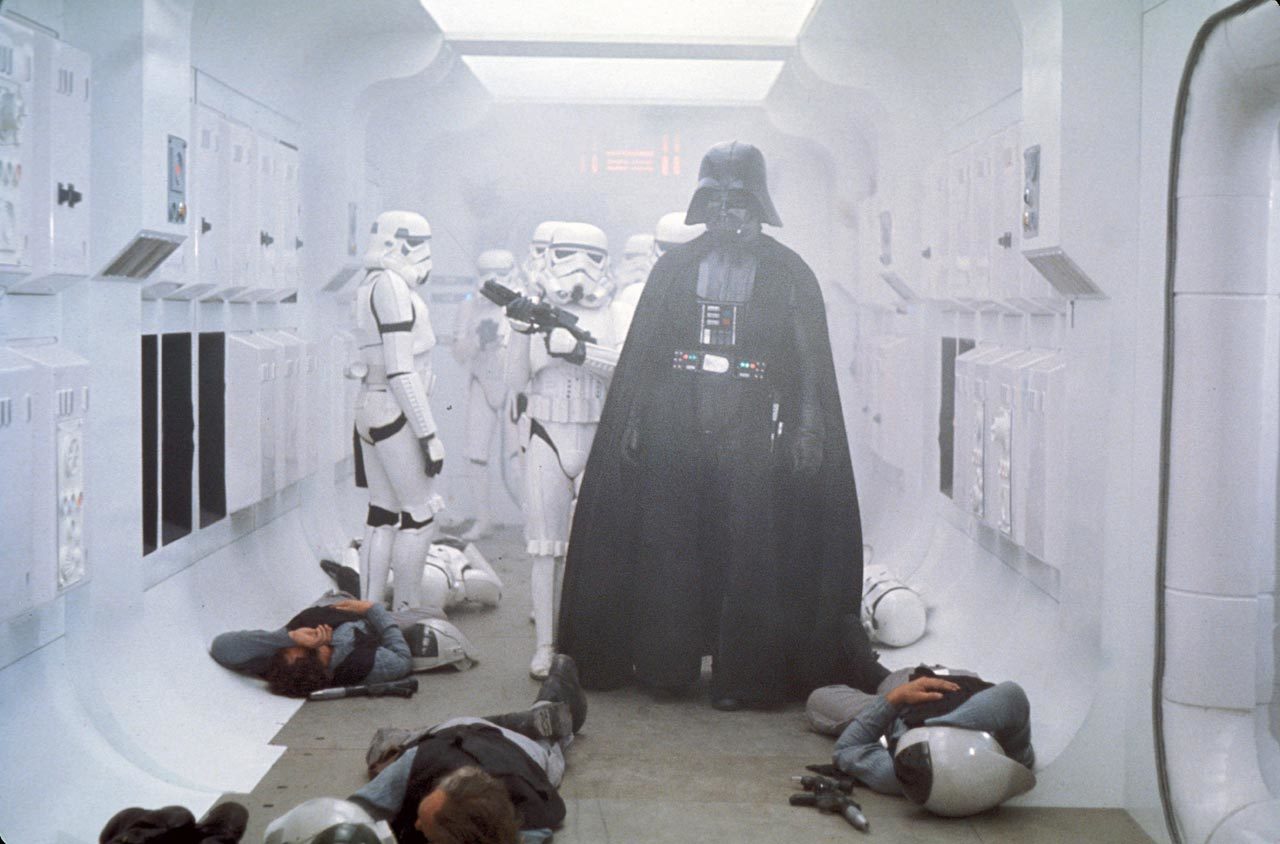 Even when he had red tinted eyes in A New Hope he was still the coolest villain I had ever seen. I mean think about it, his debut into the movie was through a doorway of smoke and observing the bodies of the rebels that had dared to defy his soldiers with his instantly imposing presence. Best entrance into a movie ever. Darth Vader emits pure authority and fear and that’s why he’s such an awesome villain.

Rogue One was already good enough as it was and then this scene appeared into the movie! As I’ve told you before, I LOVE Darth Vader and seeing him take out all of those poor rebels was horrifically mesmerizing. I mean look at this picture. It’s SO EPIC looking! Darth Vader is no joke and this movie restored him to his frightening status.

2. Entering the Hoth Base 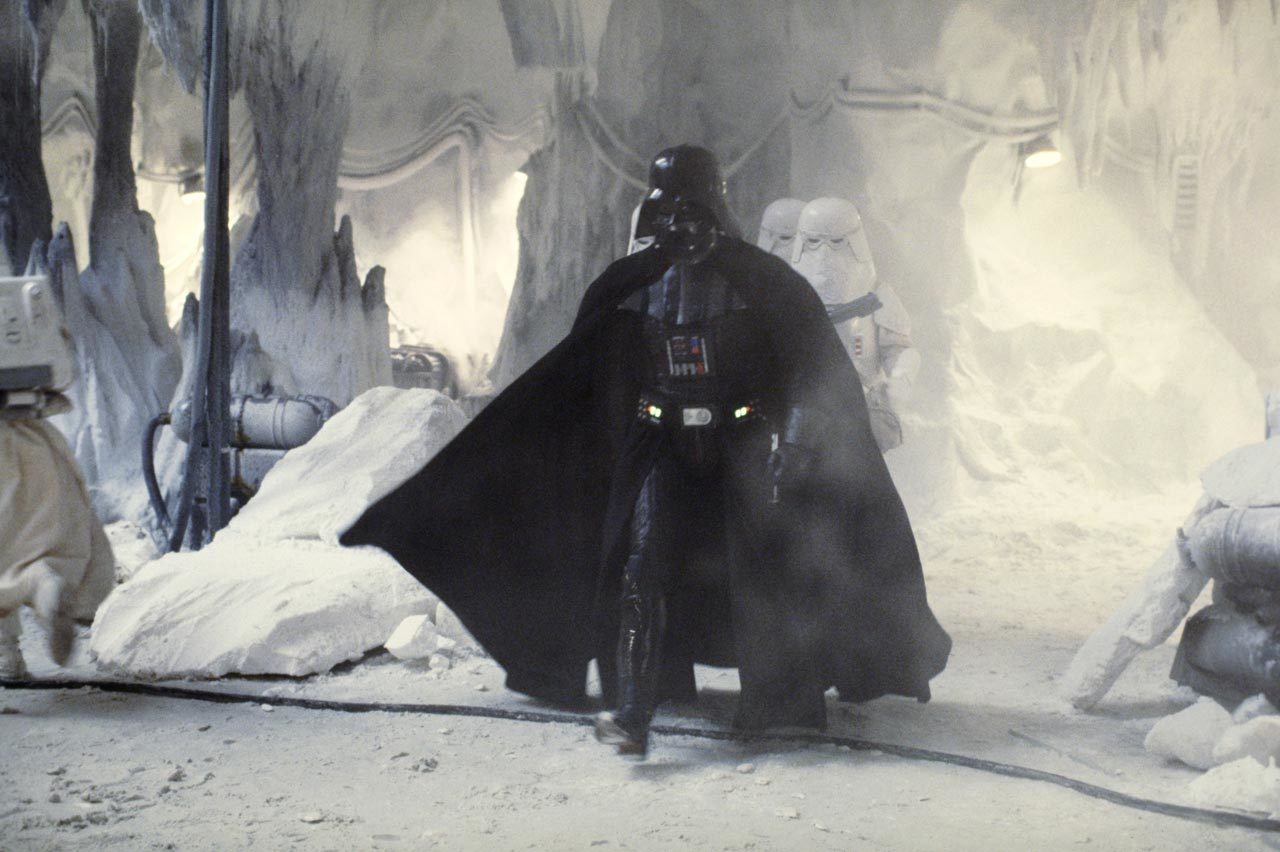 This is another cool scene featuring Darth Vader in all of his dark caped glory. He was already an awesome and intimidating character in A New Hope but after The Empire Strikes Back he would become a legend amongst villains in cinema and this scene, to me, accentuates that fact. I don’t know what it is with me and fancy Darth Vader entrances but there’s nothing cooler than seeing Darth Vader roaming through the Hoth rebel base with a troop of snowtroopers trailing him. Epic! I mean that scene is one of my favorite scenes in The Empire Strikes Back because that’s simply how cool he is.

Darth Vader was no joke in The Empire Strikes Back and the trap he set for Luke Skywalker on Cloud City proves that. First of all, the way he blocked those blaster bolts from Han’s gun with his dark gloved hands is beyond awesome. Secondly, he was going to make sure Han suffered for his crimes. He had him tortured and frozen in carbonite. That’s brutal. And that’s why he’s one of the scariest villains in Star Wars.

The reveal that Darth Vader was Luke’s father is still one of the greatest shockers in cinema history and of course it involved the rather awesome, menacing, scary, and just straight down cool Darth Vader. This is one of his greatest moments because not only did he deliver the drop-the-mic moment of the movie but it’s also the first time you see the light within him. Even though he was still full of darkness he practically begged for his son to join him because for him he thought he had lost everything that he had once cared about in his former life. Luke, to him, was the most special treasure he could’ve ever been provided and he didn’t want to lose him. It’s actually really sweet when you really think about it. 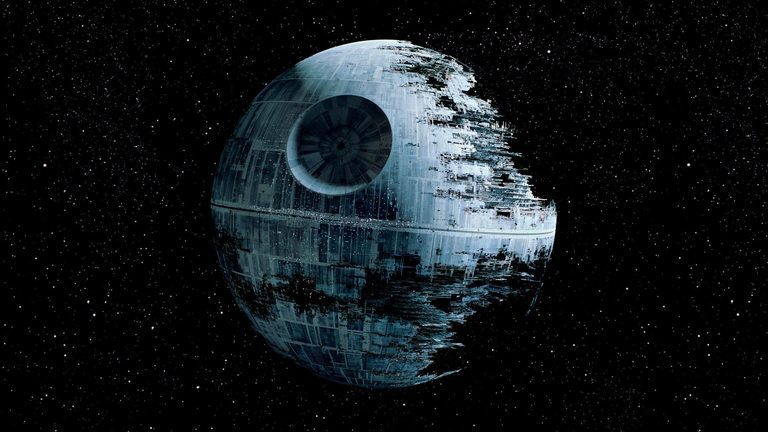 The beginning of Return of the Jedi is fun because the movie starts with Darth Vader checking up on the progress of the Death Star in preparation for the arrival of Emperor Palpatine and it’s one of his best scenes in Star Wars simply because he emits such authority at that part. I love this scene and it’s undoubtedly one of my favorite Star Wars beginnings.

Darth Vader was a monster, there’s no doubt about that, but his love for his son was powerful than anything and this scene illustrates that. The fact Darth Vader found the guts to throw Palpatine down into the Death Star reactor is one of the greatest twists to a villain ever. He could’ve easily let Luke get electrocuted to death but he refused to have another family member of his die. Darth Vader was a terrible villain but at that moment he became an admirable hero.

Darth Vader had renounced the dark side, he had saved his son from an electric death, and even though he ended up dying due to his sacrifice it was the perfect way to end his six movie long story. This scene is so emotional that it has definitely brought tears to my eyes a countless amount of times and only a truly great character can bring me to tears if they find their demise in a film. Hopefully Kylo Ren won’t come to a similar fate in Episode IX. 😦

Well, these eight moments are my favorite from the iconic villain, Darth Vader. I thank you for reading and I hope you have a magical day. May the Force Be With You.