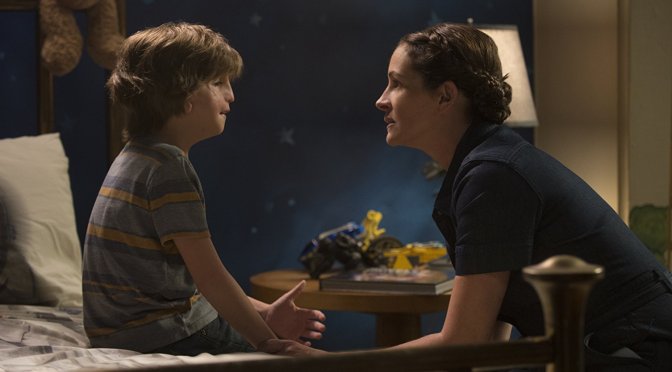 Last night I was bored and looking for a new movie and I happened to chance this cute film that came out last year called Wonder. It’s the true story of a young boy named Auggie with a face deformity and his experience as he goes to middle-school for the first time. That’s basically the entire plot of the film. We follow his journey, his sister’s story and a couple of friends’ journeys as well throughout the film and it’s a really touching film through its entirety.

This movie will hit all of your emotions. There’s humor, sadness, hope, elation, a bit of anger, and there’s Chewbacca as well. Who doesn’t love seeing Chewbacca? Whenever he appeared in this movie a giant smile came to my face at simply the awesomeness of having such an iconic Star Wars character play a part in this film.

Now I have to warn you. If you’re a person who doesn’t like to cry at movies do NOT watch this film because it pulls at your tear ducts through the ENTIRE movie, from beginning to end. Now, I’m totally down with a movie that’s kind of sappy and makes me want to cry a lot and this film definitely had that element within it but I’m just warning you. Make sure you have the tissues on standby.

I also loved the message this movie brought; that it’s best to judge a person’s character by their heart rather than their looks. It’s a beautiful lesson the movie taught and it really made the movie worth watching for me.

I enjoyed this movie, I really did. In fact, it was better than I thought it would be…but there was one problem. The movie was well thought out and had a lot of engaging sequences but after a while it seemed like the film just kept dragging on and would never end. Time and time again I thought the movie was over and it kept continuing for another lengthy sequence. The movie ended up only being an hour and fifty-three minutes but it felt like a film that had a run time that spanned clearly over two hours which isn’t always a great thing. But it is a very cute movie though.

It’s definitely a great family movie for those with children ranging from eleven all the way to sixteen and I’m glad that I managed to see it. I highly recommend watching it. You won’t be disappointed and it will definitely provide you several smiles.

I thank you for reading and I hope you have a fabulous day.