I. Love. ‘Star Wars’! I’ve loved it before I even knew I was watching it. The music, the concept of the Force, the lightsabers, the Jedi, the Sith, the story, everything about Star Wars was special to me…and those were the prequels! When I discovered the original trilogy I became even more of a Star Wars fan and now with these new movies I’m practically bursting at the seams with excitement. So today on this glorious May the 4th I’m going to share with you all of the wonderful things that make me LOVE Star Wars so much. Enjoy!

There is nothing in cinema history that makes me more excited for the beginning of a movie than the opening crawl for Star Wars. There’s just something truly magical about seeing those words, “In a galaxy far, far away” in that iconic blue color and then hearing John Williams’ fantastic classic Star Wars theme burst into your ears as you watch the opening crawl make its way up the screen with the backdrop of the galaxy’s millions of stars. Even if a Star Wars movie ends up being a little lamer than some of its other Star Wars predecessors the opening crawl never disappoints and it’s one of the main reasons why I love Star Wars so much.

Star Wars is the only franchise where I care about the characters’ stories so closely. Other movies you just wait for the next film to see what happens in the overall scope of things but Star Wars is SO much more personal in the way that they create the characters and that’s part of the reason why it became such a worldwide phenomenon in 1977. Viewers saw themselves reflected in the young, innocent heroism of Luke Skywalker or the roguish, cocky nature of Han Solo or even the brave, strong-willed attitude of Princess Leia. They were heroes truly worth rooting for and they made the movie worth caring about. It was a modern day fairy tale being told through cinema and those stories are still evolving and making viewers like me so happy still to this day.

Now we have characters like Rey, Kylo Ren, Finn, and Poe whose stories are being told and eventually leading to some unknown outcome that I can’t wait to see. Their stories are entirely relatable and sometimes inspiring. The theorizing, the analyzing, it’s so much fun for me and it’s why I’m such a HUGE Star Wars fan.

I don’t think Star Wars would be what it is today if it wasn’t for the incredible score John Williams made for the film. Not only are the stories and the characters fascinating but when you have the backdrop of John Williams’ composing in your ears it makes the experience all the more powerful. George Lucas was the genius behind Star Wars but John Williams is the soul of the franchise. 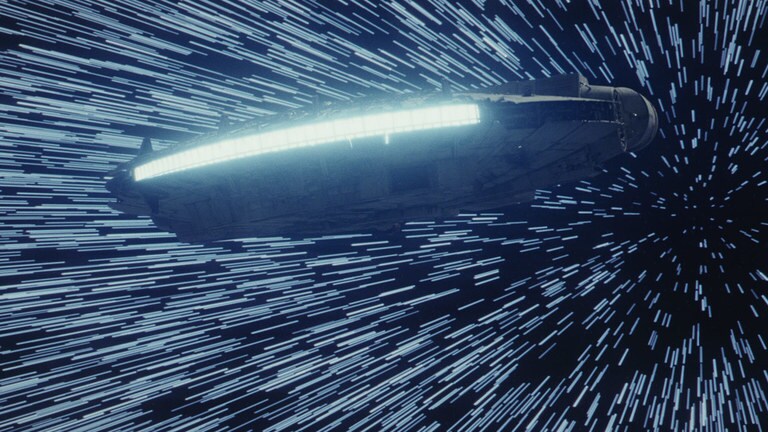 I think the Millennium Falcon is the only ship that I think of as a character, that’s how incredible it is. It’s yet another reason why I love Star Wars as much as I do and I couldn’t imagine the franchise without it.

There’s no cooler fictional weapon than lightsabers. The various colors, the sound they make, everything about lightsabers are AWESOME! I mean, which Star Wars fan hasn’t pretended to have a lightsaber fight at least once in their lives? Star Wars has brought so many fascinatingly cool things to the world of cinema and the lives of movie viewers around the globe and lightsabers are definitely one of those cool inventions. And I’m beyond excited to see what Rey’s new lightsaber will be when we see her again in Episode IX.

I thank you for reading and I hope you have a splendid Star Wars day. May the 4th be with you. 🙂

3 thoughts on “The Things That Make Me Love ‘Star Wars’”