One of my favorite things about watching a new Star Wars movie is seeing all of the new aliens, locations, trinkets, etc. and Solo was packed to the rim with eye catching characters, brand new aliens, and yes, more stormtroopers. I love it! So today I’m going to share with you all of the incredible new creations that Solo brought to the Star Wars universe that I happened to love the most. Enjoy! 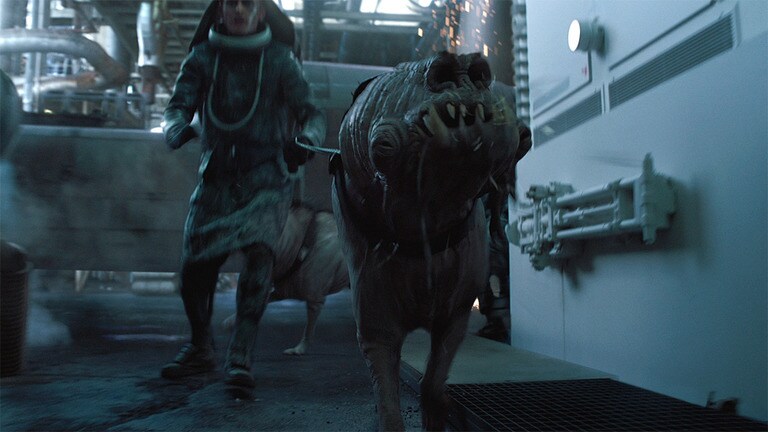 Um…it’s official. Star Wars dogs are not cute. *shudder* These hounds were simply horrifying to look at…but they were so cool at the same time. Only in Star Wars would you see an alien hound as gross and magnificent as this and that’s why I love this franchise so much. 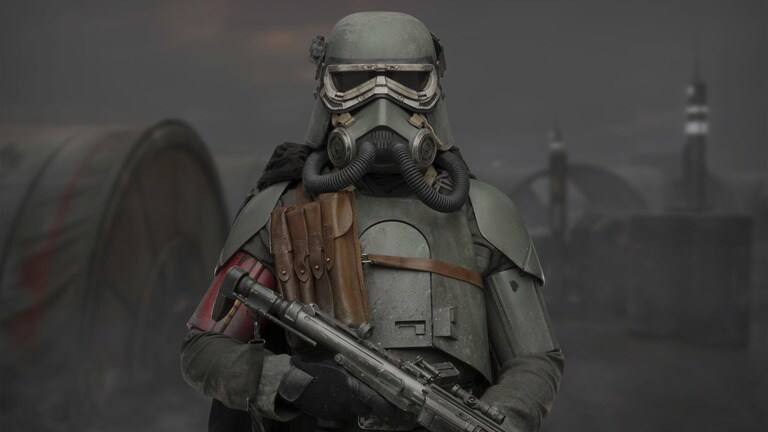 With every new Star Wars movie comes a new rendition of the iconic stormtrooper and I am just impressed. How do they keep coming up with ideas for brand new troopers? I have no idea. But, Solo continued that tradition and I’m so happy about it. These Mudtroopers look so cool with their massive goggles and their mucky brown armor perfect for the conditions of the muddy planet, Mimban. Um…did I mention that I love Star Wars? 🙂 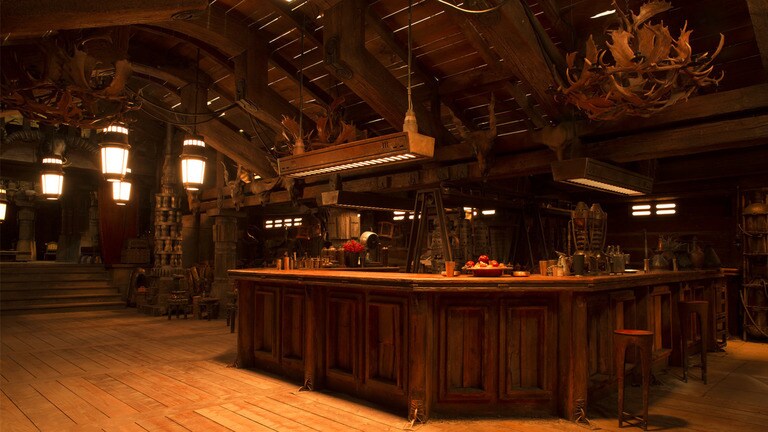 New Star Wars movies also mean new locations and once again Solo did not disappoint as it took us to worlds unlike anything we had seen before. The Lodge, a hangout in the location of Fort Ypso, is where Han first meets Lando and from the looks of this picture you wouldn’t even recognize it from the actual movie. In the film aliens and humanoids crowded the interior of The Lodge to the point of not allowing the viewer to really see everything sitting on the walls and so forth, at least not on the first viewing. In this picture, however, you can see the homey charm of this tavern and I’m glad to see that Star Wars still continues to surprise me with new places that haven’t ever been seen in the franchise before.

END_OF_DOCUMENT_TOKEN_TO_BE_REPLACED

Since the Tesseract appeared in Captain America: The First Avenger it’s been a slow culmination of the six infamous Infinity Stones that Thanos has been secretly waiting to get in the past seven years and now that they have all been found…and used *wince* I couldn’t help but ask myself which of the Infinity Stones was my personal favorite? Well, as you can see from the picture for this post, my favorite stone is the Time Stone, and for good reason.

First of all, it appeared in one of my favorite MCU films, Doctor Strange, and so that was a nice surprise.

Secondly, the Eye of Agamotto is such an amazing relic. It’s actually, besides Doctor Strange’s cape and Thor’s new axe, Stormbreaker, my favorite item in the MCU. I love its ancient look. I love that it is truly shaped like an eye and when it is opened the bright emerald green glow of the gem within its confines is just brilliant to look at.

Three, it can turn back time! How awesome is that? If I had the ability to turn back time I would probably go back and watch The Force Awakens in the movie theaters another five times. 🙂

The Time Stone is such a powerful stone that it ended up becoming the most important asset in Thanos’s quest for galactic cleansing, for when Scarlet Witch destroyed the Mind Stone (and Vision along with it) all he had to do was turn back the clock and retrieve the stone for himself (which was horrible by the way.) If that doesn’t prove that the Time Stone is undoubtedly the most powerful of the incredible gems then I don’t know what to say. Now we haven’t seen the Soul Stone in action yet. Maybe it can be used to bring people back to life, which would then probably make it actually the most powerful stone in Thanos’s collection but until I see it resurrect Thanos for a Round 2 of fighting or something outlandish like that then the Time Stone will remain as my favorite.

Which stone is your favorite? Feel free to join in on the conversation in the comments below. I thank you for reading and I hope you have a splendid day.

Spider-Man is arguably Marvel’s most prominent and recognized character in the comic world. Before I ever knew about Batman or Superman or Wonder Woman, etc, I knew who Spider Man was through this cartoon I used to watch all of the time as a child. It used to be one of my favorite pastimes as I watched Peter Parker fighting bad guys like the Green Goblin and Doctor Octopus (he’s my favorite Spider-Man villain) and saving his girlfriend, Mary Jane, from the vile clutches of the villains. Since then, however, I haven’t really been a huge Spider-Man fan simply because the movies weren’t that great. I wasn’t old enough to watch the first major Spider-Man movies starring Toby Macguire. I saw The Amazing Spider-Man 2 starring Andrew Garfield at a movie theaters. Didn’t like it. It took until 2016’s Captain America: Civil War to make me a Spider-Man fan again as Tom Holland’s perfect rendition of the character was brought to life. Since then I have become super interested in the teenage superhero again and now, with Sony providing us a look at another Spider-Man phenom who goes by the name of Miles Morales, I was super interested in seeing the trailer for this new movie. Here it is.

First off, I LOVE this animation. When I heard Sony was making another Spider-Man movie I didn’t know whether to be excited or confused. Wasn’t there already a story involving Spider-Man being told through the MCU? After seeing this trailer I am now beyond intrigued about this film for several reasons. One, like I said before, is because of the animation. When I think of an animated film I usually imagine something on par with Pixar’s design of animated movies or something a little more cartoony like Scooby-Doo but the animation for this film is 100% rad. It feels like the movie is catering to adults and children at the same time, for the animation feels like something I could see on Adult Swim, and yet the content of the film is of course very family friendly.