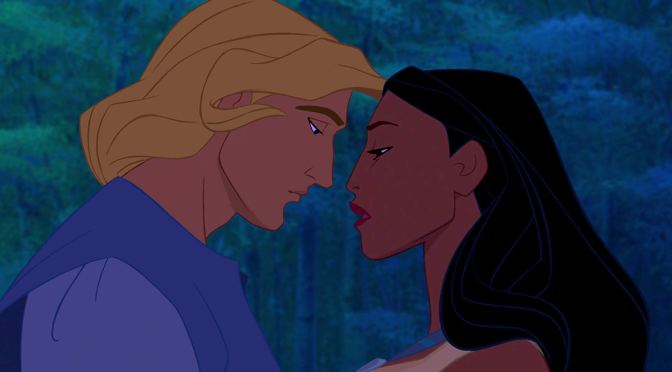 Through most of my years growing up, I didn’t watch Disney movies often. I remember, as a child, seeing Snow White and the Seven Dwarves, Aladdin, Tarzan, and Mulan but those were the only Disney films that I ever watched. It was only until recently that I started getting into the Disney classics as I revisited Mulan and Tarzan, rewatched The Lion King for the third time, and finally saw, for the first time, the classic Beauty and the Beast film after enjoying the live-action version. But then I decided to tackle one of Disney’s most mysterious movies to me, Pocahontas.

Growing up it never appealed to me to watch it even though it contained one of my favorite Disney songs, “Colors of the Wind”. But after having seen nearly all of the Disney classics (I still need to watch The Little Mermaid) I figured I might as well check it out. And I have to say, it was pretty good.

Pocahontas is a classic love story that’s been told many times before. It follows the story of, well, Pocahontas, as she yearns to discover what her destiny is. Her father, the chief, wants her to marry the handsome young Indian warrior of her tribe but she finds him too stern for her liking. But as English settlers arrive on her people’s shores she meets the man that she would ultimately fall in love with, Captain John Smith.

Captain John Smith is your typical heralded Englishman. He’s traveled the world, fought “savages”, been praised as a warrior of his people, and he yearns for adventure. He views the New World as a gigantic playground, a place that he can conquer, but after meeting the lovely Pocahontas it isn’t long before she puts quite a doozy on him, changing his views of how the world really works.

As Pocahontas and John are caught between these warring sides their relationship becomes fraught with danger. But their unyielding love for one another was unbreakable. 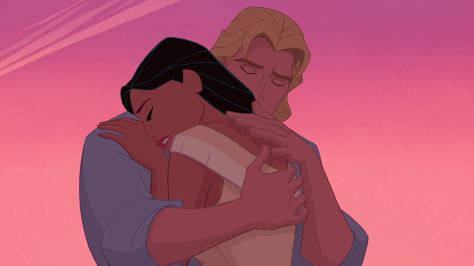 I loved the film’s message that love is greater than hate, for in a time where our country is more divided than ever this message is all the more resonant. 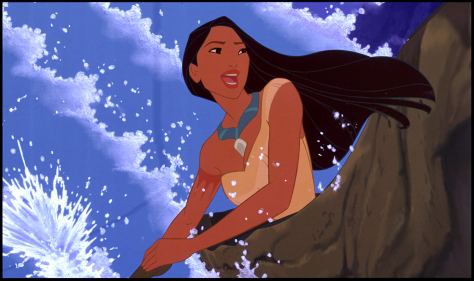 For years I was afraid to watch Pocahontas because I feared it wouldn’t portray Native Americans in a respectable fashion and I’m relieved to say that it did. The movie’s storyline is based on a real-life occurrence that happened hundreds of years ago where an Englishman met the gorgeous Pocahontas and fell for her. But in the actual history books, Pocahontas returned to London with the Englishmen and soon died upon arrival after obtaining a terrible sickness, turning the love story tragic. Thankfully Disney took some creative liberties and let Pocahontas remain in North America where she would live on in John’s memory rather than let her leave with him to a horrific fate. I appreciated that.

I also appreciated that Pocahontas was never a damsel in distress in the film. A lot of times the classic Disney movies portrayed women as pretty princesses who awaited a man to save them from some terrible curse or something like that. That wasn’t Pocahontas’s story and that was definitely relieving. She was an independent woman with the power of the world at her fingertips. Honestly, Pocahontas would make an awesome Marvel superhero if people got creative.

I was also surprised at how romantic this movie was. I mean, all classic Disney movies have elements of romance to them but this film felt extra sappy and adultlike for some reason. I was totally getting The Bounty flashbacks.

(If you don’t know what The Bounty is it’s a movie in the 80s’ starring Mel Gibson and Anthony Hopkins. Check it out. It’s REALLY good.)

Of course, Beauty and the Beast is a very romantic story but Pocahontas had the foot heavy on the romance factor for a children’s movie and I was honestly a bit surprised.

What would I give this movie? I’m giving it 85 out of a 100 and 3.8 out of 5 stars. It’s a good Disney movie but it isn’t great. But I will say, it did make me shed a few tears. Gosh, Disney movies always make me cry. I don’t know what it is about these films but they always manage to get to my emotions. *sniffle*

So yeah, if you’ve never seen Pocahontas I’d definitely recommend it. It’s a decent Disney movie and who doesn’t love a good, sappy love story every now and then?