Every week I like to trek down memory lane by reposting an old post I wrote a while back and this post here is about as ancient as it gets. I first posted it on January 2, 2017…nearly two years ago. It’s amazing to think of the journey that I have taken since then and all the different films I have watched (and enjoyed) since then.

So, on that note, I hope you enjoy this week’s segment of Throwback Friday. 🙂

SPOILER ALERT! I talked about everything I liked in the movie and so if you have never seen it before and you’d like to avoid spoilers I’d highly advise you to stop reading now. Thanks for heeding my warning.

I love that this movie showed us six brand new worlds that we’ve never seen before in Star Wars. There was the planet where Galen and his family resided, Lah’Mu. The Rings of Kafrene. The Imperial labor camp, Wobani. Jedha, home to the last Jedi temple. Eadu. And Scarif. Even though it was brief my favorite new location was the trading outpost at the Rings of Kafrene. The concept of a small city placed in between two asteroids is amazing. I hope the next Star Wars has cool, original locations like Rogue One did.

The Return of Grand Moff Tarkin 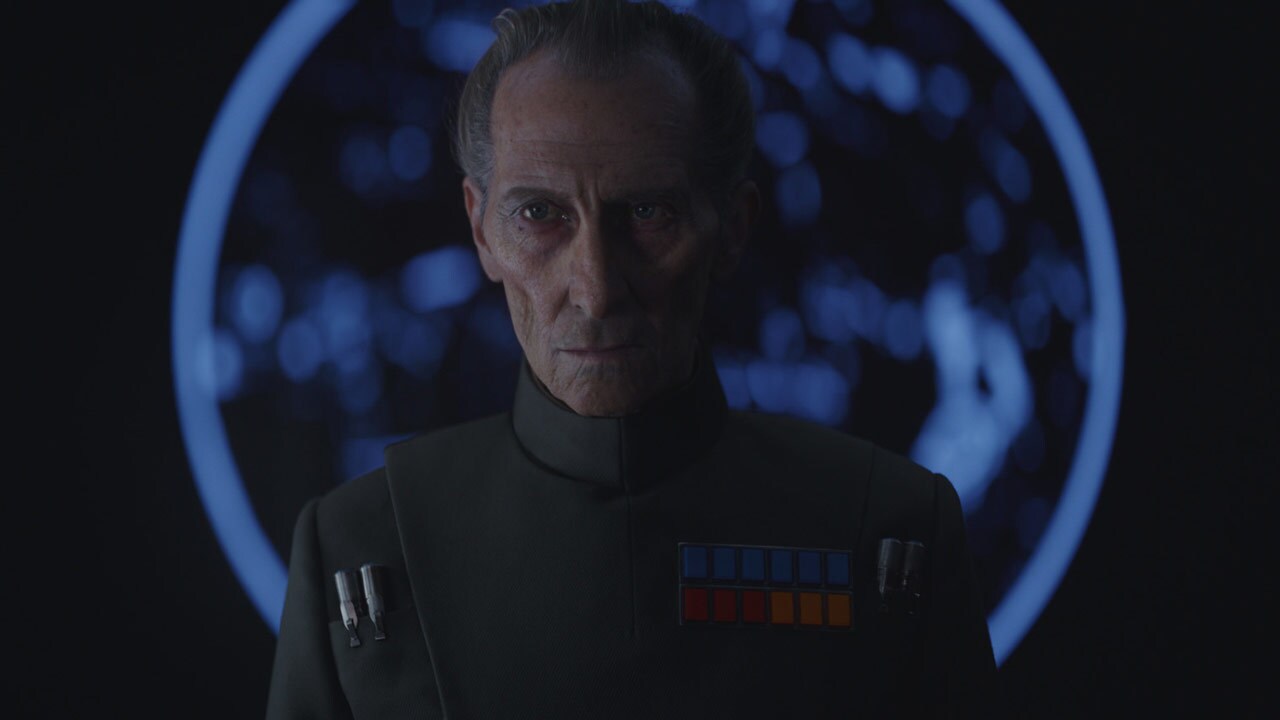 Having Grand Moff Tarkin in Rogue One was brilliant! The CGI used for him wasn’t entirely the best I’ve ever seen but putting him in the movie was a great move because it cemented this film in the Star Wars timeline. He was the best surprise of the movie and to me, was the real villain. Krennic was just the angry puppet. This also shows that Disney can bring any character back to the big screen. 🙂

The Action in Rogue One 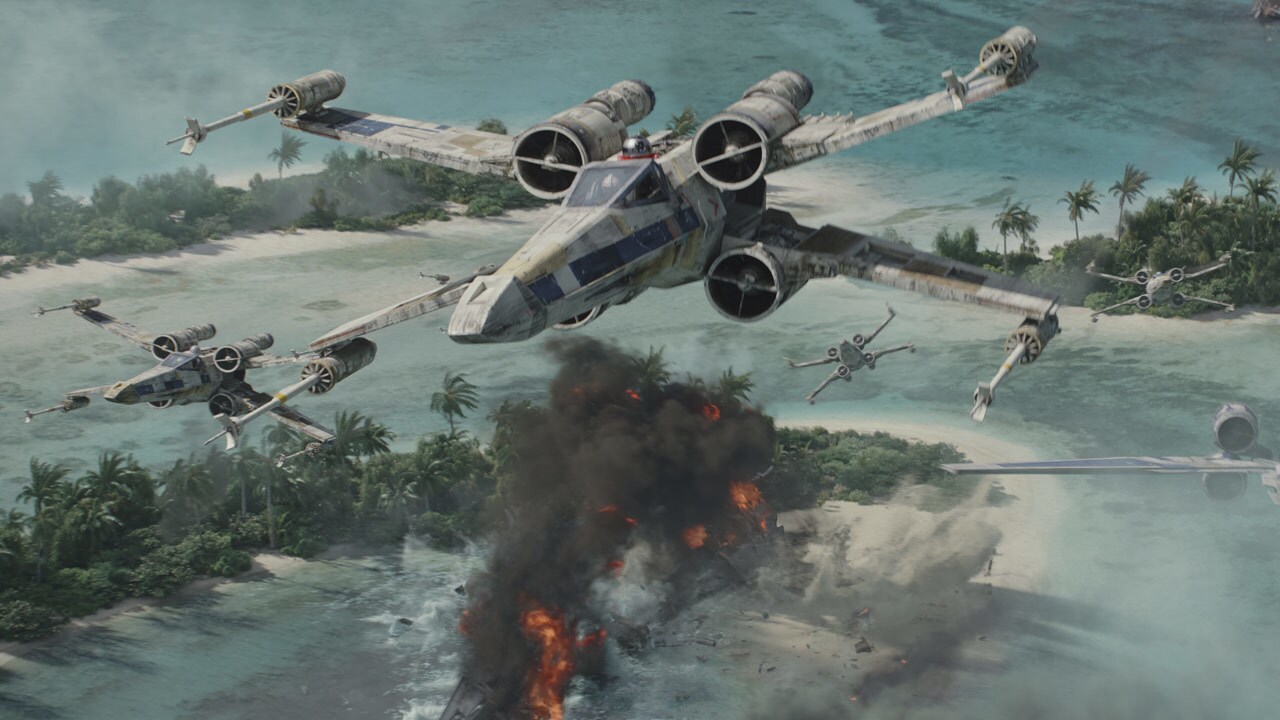 This movie was full of intense action that was superb in IMAX. The scene in Jedha where the rebels start fighting the stormtroopers is one of the many great action sequences. There were so many fantastically loud explosions and so much commotion it’ll take me a while to see everything that happened. One of my favorite pieces in that sequence is when the walker came through the streets firing at everything in sight. That was really cool! This long action scene also allowed Jyn to show off her very impressive skills. And to have Chirrut and Baze finish off the scene by showing them take down about a dozen stormtroopers by themselves was perfect and one of the highlights of the film to me.

The scene when the Death Star blows up Jedha is my favorite part of the movie. I’ve always wanted to know just exactly what’s it like for the people on the surface of the planets that get annihilated. The Force Awakens gave a slight hint of how horrifying it is but Rogue One really elaborated on that terrible experience. I love when Bodhi is looking and there’s that giant cloud of huge chunks of rock and dirt coming towards them. When they barely escape and they show the space shot where the fire and dirt are reaching up into space all I could say was “Wow.” That part was jaw-dropping in IMAX. 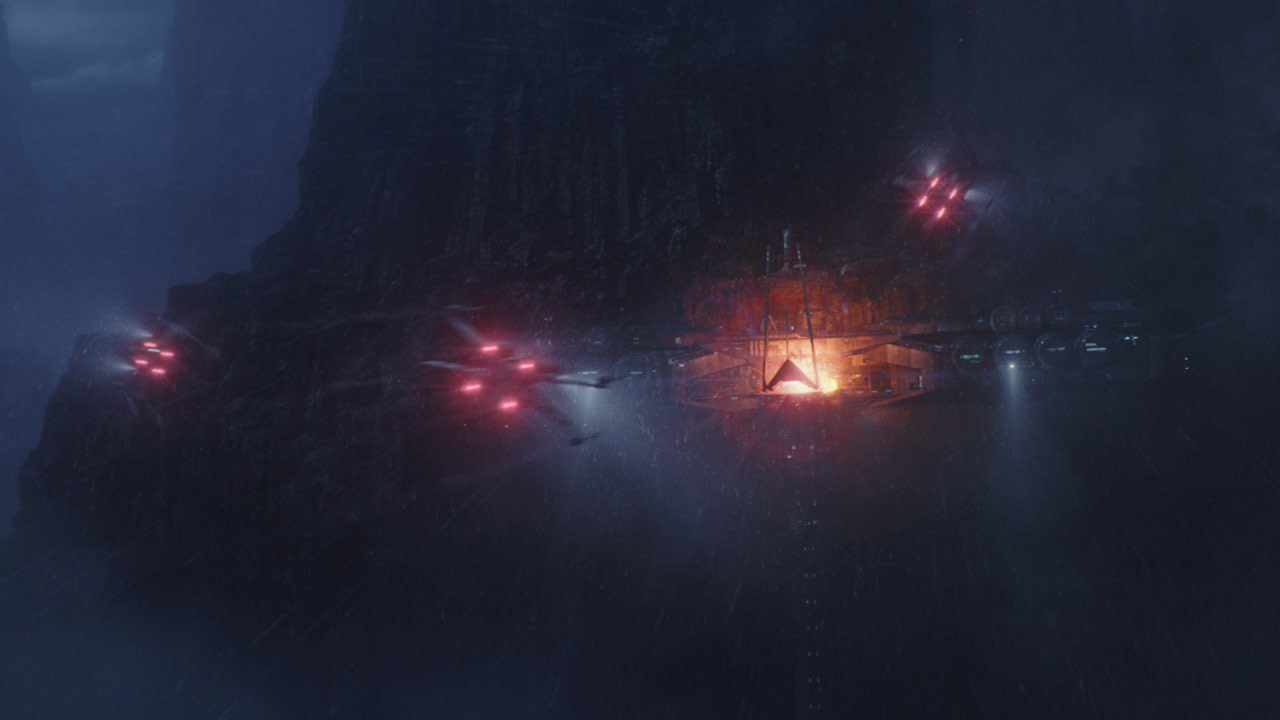 The action on Eadu was okay. I loved when Chirrut turned his stick into a crossbow and shot down that tie fighter. That was awesome. Baze protecting Jyn and Cassian from the droves of stormtroopers emerging from the facility in his perch on the rocks was another amazing part. I think he has the coolest gun that I have ever seen in Star Wars.

The space battle was fantastic. I loved how several times throughout the sequence the camera had you in a cockpit flying alongside the other X-Wings. At those moments in IMAX it kind of felt like Star Tours at Disney World except without the moving seats. This was, for me, the best space battle out of all the Star Wars films.

The greatest part of the action on the surface of Scarif was when Chirrut, Baze, and the rebels are busy fighting the stormtroopers and that GIANT AT-ACT appeared out of the smoke. That was another one of those beautiful shots that enhanced the film because it truly showed how difficult it is to fight against the Empire.

It’s sad because everyone died in this Star Wars film. K-2SO’s death was one I was not expecting. Before I had watched the movie I had predicted that he would undoubtedly live. A major droid has never gotten killed in a Star Wars movie so why would he? As I watched him riddled with blast holes from the horde of approaching stormtroopers I remember thinking, “Oh my goodness. He’s going to die.” And he did which was horrible.

Chirrut’s death was just as saddening. I really hoped he wouldn’t die because he was so cool. At first, when he miraculously reached that switch I was so happy because he made it without getting shot. Then when he got knocked forward by that explosion as he was walking back to the ship I was shocked. At least he got to say goodbye to his best friend Baze but it was still sad.

Bodhi’s death was sudden and not that depressing. I wished they could’ve made his death a little more memorable.

Baze’s death was at least better than Bodhi’s. He shot Death Trooper after Death Trooper while taking blasts of his own. Unfortunately, the last trooper he took down still had a ticking grenade in his hand and he became the third person to fall to an explosion. (Fourth if you count Galen Erso on Eadu.) The writers definitely weren’t trying to get creative with these characters’ deaths. They just decided to have each of them get blown up.

Director Krennic’s demise was well deserved. I loved when he looked up after getting shot and saw the Death Star in the sky. The weapon’s destruction that he thought was so beautiful was going to be his doom. He got the ultimate karma. 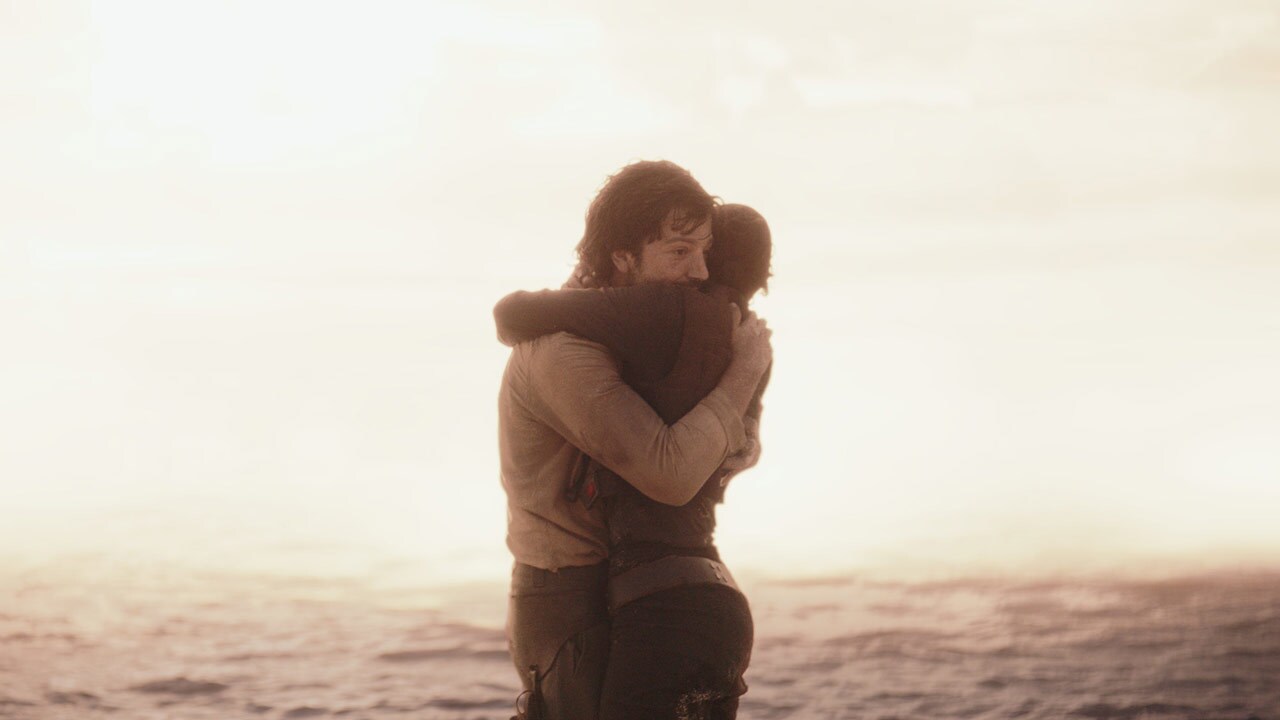 Jyn and Cassian’s death, of course, is the grimmest. The prequel trilogy tried to tell the love story between Anakin and Padme but thanks to bad acting and a terrible script when everything crumbles for them it’s not even close to sad. The romantic arc between Jyn and Cassian is perfectly written because it never feels forced or unnecessary. When they’re taking that elevator ride down to the beach they both realize like each other a whole lot. Their fate is unfortunately sealed however when the Death Star fires on the base. When they’re hugging each other on the beach and the bright light washes over them it’s a very solemn moment. I really hope the next Star Wars doesn’t have as high a death count.

Darth Vader is Back! 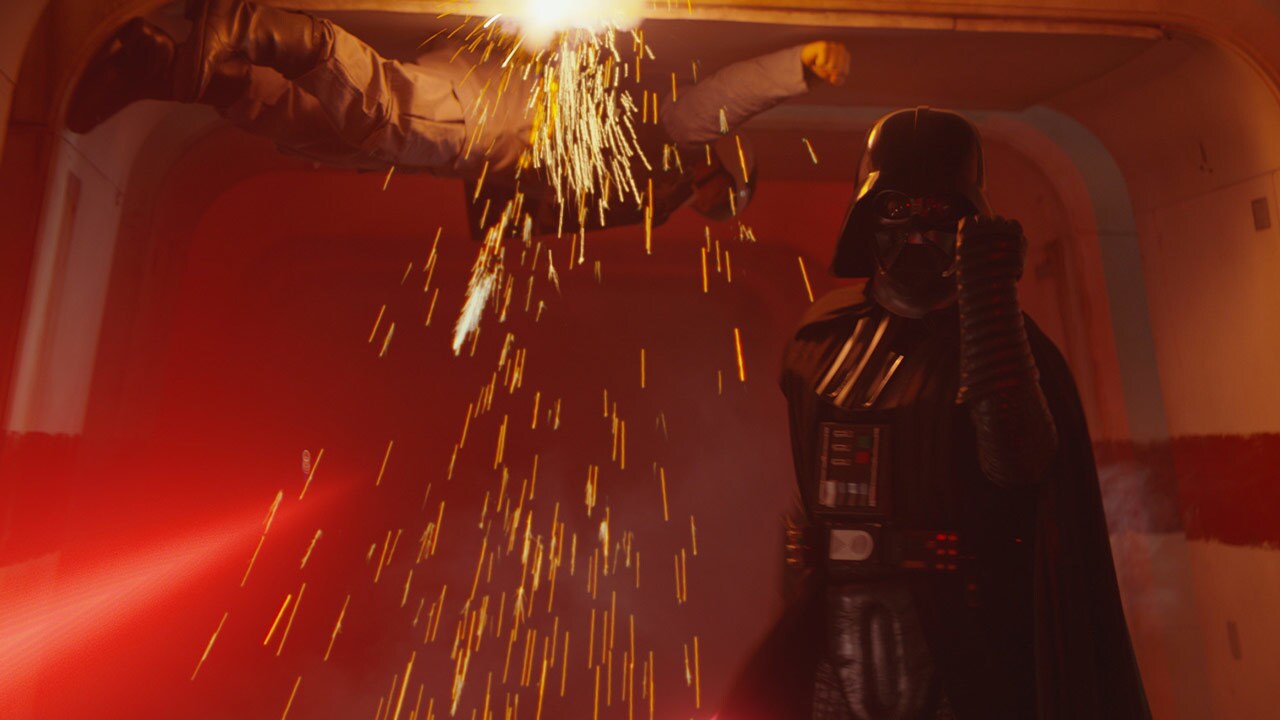 It’s been decades since the iconic villain has had any substance in the Star Wars saga. In Rogue One he appeared in only three scenes but his impact on the film lived up to his standards. His first appearance in the movie was fantastic. First of all, Darth Vader has a castle? What?! And it’s on Mustafar?! I loved how Rogue One not only tied itself to A New Hope but it also recognized the prequel trilogy by putting his castle on the planet where he met his gruesome fate. The next time I watch Revenge of the Sith the Mustafar scenes will have an entirely new meaning.

I loved when the door opened and you could see Darth Vader’s shadow on the wall behind Director Krennic. That was a beautiful shot because it showed how nervous Krennic was while also displaying the menacing, awesome presence of the Sith Lord. Their conversation was brief but wonderful. When Darth Vader choked Krennic and then said, “Be careful not to choke on your aspirations” I was so excited Darth Vader was back and just as great as he once was.

The last scene with him was incredible! I remember when I watched it the first time I was wondering why the rebels were so scared. Then when out of the darkness came his iconic breath and blood red lightsaber my eyes widened in gleeful horror. I feel so sorry for those rebels. Darth Vader sliced and force choked his way through them like as if they were nothing. At that moment you realize just how frightening it would be to see Darth Vader if you weren’t a Jedi. I remember when I first heard Darth Vader was going to be in this film I was hoping he would have at least one scene where he would terrorize the rebels. Before this scene came I thought that the movie would end without him doing anything truly substantial. I’m so happy I was wrong. This, for me, is the second best scene with Darth Vader of all the Star Wars films. If him telling Luke that he was his father wasn’t so crucial to the Star Wars saga this would easily be my favorite scene with him. Let’s hope there will be more standalone films in the future with even more Darth Vader in it.

The Conclusion of Rogue One

And then when you think the movie can’t possibly get any better they throw a Leia bombshell on everybody. Seeing her at the very end of the movie was so fantastic because not only did it connect Rogue One and A New Hope like a puzzle piece but it showed, once again, that they can do so much with CGI these days. This was the PERFECT way to end the movie.

I give Rogue One 95 out of 100. There are a few flaws but the story and endearing characters were so flawlessly written into this film that it definitely deserves an A. It also, without a doubt, is the best prequel. The cameos and nods to A New Hope never felt forced or unnecessary and only enriched the story of the 1977 film.

For me, this is definitely one of the best Star Wars movies ever made. I can’t say it is the best for the reason that the other Star Wars episodes are just that, episodes. Those movies can’t reveal everything in one film. If the original trilogy could somehow be jammed into one movie it would be a very, very good movie full of plot twists.

Rogue One was such a fantastic entry into the Star Wars universe that I’m now super excited to see the Han Solo movie in 2018. If it’s anything like this film it’s going to be very enjoyable.