The other day I watched the second half of Attack of the Clones, which I hadn’t seen in years (I don’t watch it very often anymore) and as I watched the movie I found myself baffled by Padme’s role in the film. Yeah, I’ve watched the film a million times but I haven’t really seen it during the Disney era of Star Wars. With so many inspiring and incredible heroines to enjoy it’s almost shockingly bad how George Lucas treated his only heroine of the prequel trilogy; Padme Amidala.

And don’t get me wrong. She’s a great heroine, or at least she was in The Phantom Menace.

She was a teenage queen but you didn’t even see that because of how mature she was. She didn’t shrink under the scrutiny of the senators in the Republic, she didn’t mind calling Chancellor Valorum out for his lack of care in Naboo’s situation, and she wasn’t afraid to die fighting for the people that she loved. She literally led her meager army, with the help of the Jedi, to war against the much larger force, the Trade Federation and won!

Fast forward three years later to Attack of the Clones and it’s as if every aspect that made her such a likable character was erased, replaced by this storyline that made her seem weak in comparison to her role in The Phantom Menace. END_OF_DOCUMENT_TOKEN_TO_BE_REPLACED

It’s past halfway through the year and you can bet The Academy is already summarizing which actors, movies, music scores, etc. are worthy of Oscar nominations for this year’s Oscars. While most of the Oscar-worthy films still haven’t come out yet there are some movies and actors that are already garnering Oscar buzz. 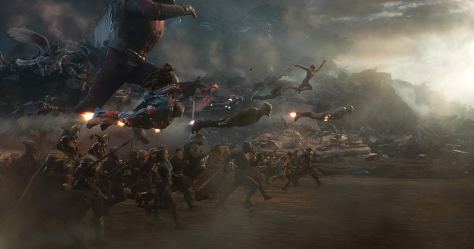 While I feel that the visual effects for Avengers: Infinity War were better than Endgame it’s destined to garner an Oscar nomination.

Godzilla: King of the Monsters

Godzilla: King of the Monsters is one of those movies that relies heavily on CGI and while this film was not very good storywise it did manage to amaze with its jaw-dropping visual effects. I mean, those action scenes were bonkers, specifically in IMAX. END_OF_DOCUMENT_TOKEN_TO_BE_REPLACED

Sharon Carter woke with a start. She sat up, gasping for breath, her heart pounding in her chest. She looked down, immediately noticing the shimmering grey smock she was now wearing. She felt her abdomen, searching for a sign of her deadly wound. There was none. END_OF_DOCUMENT_TOKEN_TO_BE_REPLACED