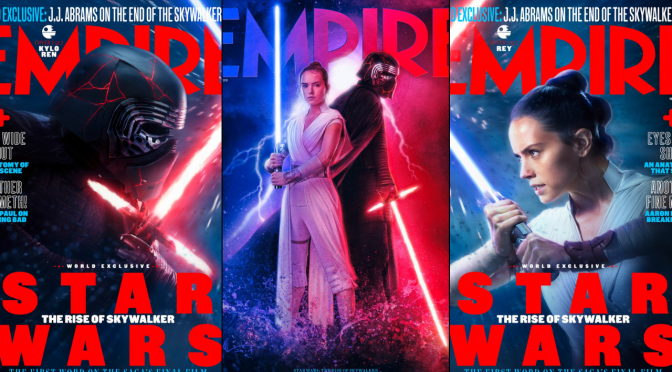 Empire Magazine’s next issue arriving on October 3 is all about the upcoming Star Wars movie, The Rise of Skywalker, and of course the issues have three tantalizing covers to observe. For this week’s Who’s Your Favorite? I wanted to delve into these covers and ask you which is your favorite? Enjoy!

Kylo Ren looks expectedly fierce with his pieced together helmet and his red lightsaber drawn and clashed with Rey’s in a shower of sparks.

While Rey’s stance seems a little impractical if there was actually a fight happening between her and Kylo Ren she still looks expectedly awesome with the fierce expression that I’ve grown to love over the years.

Rey and Kylo Ren stand back to back in this exclusive for-subscribers-only painted cover of the two characters. There are two very distinct things to notice about this cover. One, lightning is a theme that is being shared on this cover and the poster to add the very blatant idea that Palpatine’s presence is strong in this film. Two, look at the color scheme. There’s blue, there’s red, and then there’s purple. Balance. On the other two covers Kylo Ren and Rey are enemies but here they are allies standing back to back and representing their sides of the light and the dark.

Hmm… Can we expect another epic team-up in The Rise of Skywalker?

Of these three covers, which is your favorite? I’m a Kylo Ren fan so the first one is clearly amazing but the one with Rey and Kylo together tells a story so it’s definitely my favorite of the three.

This movie is going to be so good!

I thank you for reading and I hope you have a wonderful day. May the Force be with you, always.