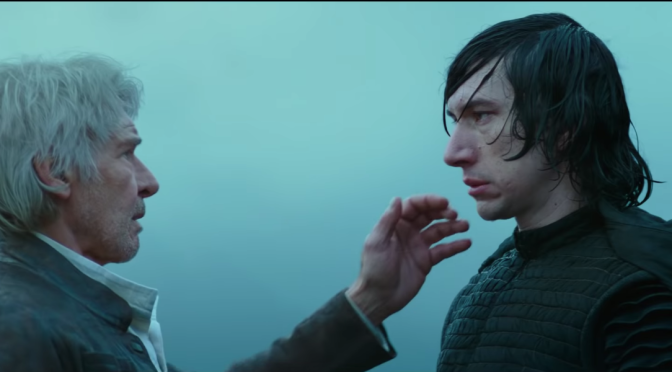 Star Wars is one of the greatest franchises in film history and what makes these go-to flicks so beloved are the iconic moments in these movies. Here’s a much-needed updated list of my ten favorite moments in Star Wars. Enjoy!

I’m not a fan of The Rise of Skywalker but even I cannot deny the awesomeness of the moment when Rey is lifted from the throes of death by practically every cool Jedi that has ever been in the franchise. Their voices blend together in a undulating “Rise” that gives me chills every time. Now, why she is so special, the trilogy never seemed to answer that question, and yeah the actual destruction of Palpatine is a bit lame, but I love this part no matter what. I loved it the first time and I love it still.

This used to be my favorite scene in all of Star Wars. Unfortunately, it only reminds me now of where everything went terribly wrong. I still love it though.

This is one of the most iconic scenes in film history. If I don’t put this on the list then…that seems a bit strange.

This scene conflicts me every time I watch it because not only is it one of my favorite scenes in Star Wars but it’s one of my least favorite too. Here are the pros and the cons of this tear inducing moment in Star Wars. The reason why this is such a good moment is because of its impact to not only the rest of the movie but even the Sequel Trilogy. First of all it was the turning point The Force Awakens needed to turn it from being a good movie to a great movie. Secondly it completed Kylo Ren’s ultimate path to redemption. Plus, it’s a really intense, quiet moment that always draws my attention, no matter how saddening it still is to watch. Now the bad thing about this scene is simply the fact that Han Solo dies! I still can’t believe they killed him off like that. A lightsaber through the stomach, really? And then he had to fall off the bridge didn’t he? Ugh. So yeah, this scene’s on my list but it’s still painful to watch.

Luke Skywalker is one of the greatest Jedi ever to live and it’s because of moments like this. After a brief plunge to what was essentially the dark side as he thoroughly kicked Darth Vader’s booty he realized, upon seeing his father’s severed robotic hand, that he was slowly becoming the thing he would never want to become.

Like a true Jedi Knight, he threw down his lightsaber before the Emperor, no matter the consequence, and stood proudly as a Jedi “like his father before him.” How can you not get pumped?! Ooh, I’m getting chills just thinking about it. 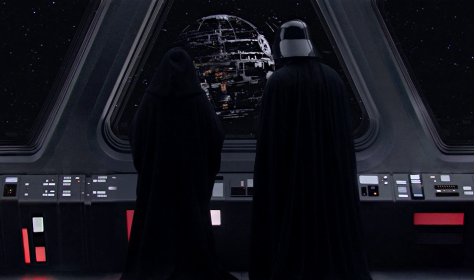 After the tragedy of Anakin Skywalker the Not-Wise the conclusion of Revenge of the Sith is nothing short of powerful and this moment here, as Vader and Palpatine stare at the battle station that would mean the ultimate dominance for the Empire being constructed, I get goosebumps on my goosebumps. Such an incredible moment with some serious musical score prominence from, yours truly, John Williams.

I mean come on! In the movie theaters I was crying. I cry at home whenever I see this scene. And yeah, it would’ve been downright INCREDIBLE if it had been Anakin to talk to him in this moment but I’m not complaining. It was a beautiful way to bring Ben Solo back.

I love Darth Vader. He’s undoubtedly one of the coolest, if not the coolest, villains in film history. All those times I watched Episodes IV-VI I didn’t realize there was one thing he never did that would’ve been so amazing to see, and that is for him to go plum off on a group of non-Force wielding enemies like he did in Rogue One. I really didn’t think I’d ever get to see a scene that looked like something out of the game, The Force Unleashed so of course I’m putting this on the list.

Luke Skywalker’s story in The Last Jedi may have not been what people expected (or wanted) but it was a powerful conclusion to his arc. His confrontation against the First Order and Kylo Ren will go down as one of the most epic moments in Jedi history. The first time I saw this scene I was in sheer awe and even now I just can’t get enough of it.

Plus, the music is really great too.

1. The Best Scene in Revenge of the Sith

The prequels can be annoying at times but Revenge of the Sith actually is pretty great and it’s because of scenes like this. His disturbing conversation about Darth Plagueis and his ability to save people from death is chilling because he knows Anakin wants nothing more than to learn this power to save Padme. It’s the ultimate bait and the true beginning of the end for Anakin as a Jedi. When Anakin asks at the end of the scene, “Is it possible to learn this power?” and Palpatine answers, “Not from a Jedi” I’m always like wow, Palpatine you are super crafty.

But what makes this scene most terrifying is the padawan he speaks of killing Plagueis…is himself. 😬

So, this is an updated list of my ten favorite moments in Star Wars.

I thank you for reading and I hope you have a thrilling day. May the force be with you.