I just watched Hamilton for only the second time last night and it is truly a masterpiece. I can’t get enough of this musical that is sheer perfection. I’m talking…SHEER perfection. Every bit of choreography, every moment of acting from the cast, the costume design, oh, it is wondrous.

It inspires me to become a better writer and to one day potentially change the world as long as, like Hamilton, I am willing to make my shot and take this world by storm.

It is so quotable, so lovable, so impactful, so undeniably brilliant that it almost feels unbelievable when you see it. How did something this incredible get made and how has nothing like this been made for? It will change the world, it will inspire young artists of color forever and one day will be looked upon as the pinnacle of artistic genius, maybe, in the same ways that Shakespeare’s work has been regarded for hundreds of years.

Hamilton is perfection and I can’t say anything less about it. As I write this, its songs revolve inside my brain, bringing me joy on a casual Tuesday morning that no movie has given me for a long while. Oh gosh, I’m ranting and completely missing the point of this post which is to share my top three favorite characters in Hamilton, which honestly almost seems unfair but here’s a crack at it. Enjoy! 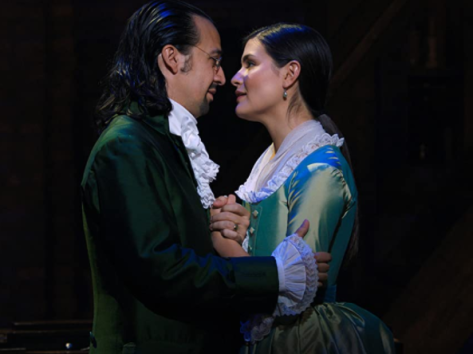 Elizabeth Schuyler could’ve been a damsel-like character. Instead, she is a strong woman whose extreme kindness and trusting nature can not be mistaken for weakness. Phillipa Soo delivers an accordingly powerful performance that ranges from shy and madly in love with Hamilton to a burning volcano of rage and finally a proud mother/wife who has been burdened with the power of her husband’s legacy and her goal to make sure his story is told.

This woman invokes such emotion in every scene she’s in and she’s almost the breakaway star of the production.

Lin-Manuel Miranda, bravo sir! Bravo! You are amazing for bringing this to life in the way you did, for simply conceptualizing this extraordinary piece of work that makes life just that much brighter.

Honestly, this story doesn’t work as well if Hamilton’s incredible story isn’t told brilliantly or portrayed as impeccably by Miranda as it is in the show but guess what, he’s the perfect catalyst to the play’s grandeur. At times you cheer for him, at times you fear for him, and there are even times when you despise him, but at the end of the story when *SPOILER ALERT* he dies you can’t help but cry for him.

I could easily say that he’s my favorite character but, well, duh. And honestly, this man’s next performance just barely outshines his due to how perfectly Miranda incorporated him into the story. So, he’s second.

Aaron Burr could’ve easily been written as the discernable villain of the story but he’s not. He is treated with the exact same respect as Hamilton, written as a hero in the face of a growing nation whose side of the story finds him opposed to Hamilton. Unlike Hamilton who seems to get every opportunity and who is loved by the likes of George Washington, the most powerful man in the country, he doesn’t get the same opportunities.

His frustration is comprehensible, his motives totally understandable, and when the end of his tale arrives and he has killed Hamilton the realization that this moment of fiery hot anger would lead to a life of misery for Burr is nothing short of heartbreaking. The first time I watched the movie his side of the story didn’t hit me as hard. This time, I cried. I couldn’t help it.

Leslie Odom Jr. delivers such an inspired performance. Every time he’s onstage and begins to sing you can’t help but stare in awe. He’s perfect for this role, through and through, and honestly, just wow, wow, wow. He deserved a Tony for this and I’m glad he got it.

Honestly, every actor did a great job in this production though, from the ensemble to the main cast, the play is nothing short of extraordinary because they worked so well together to bring this piece of art to life.

If you haven’t seen this yet then please check it out. It is worth every second, I’m telling you.

2 thoughts on “My Top Three Favorite Characters in ‘Hamilton’”