I remembered this post I wrote last year and decided to revisit it with a much-needed update. Enjoy!

While this is clearly a beautiful scene (I mean come on, Naboo’s gorgeous) I skip it every time. Padme is absolutely stunning in her wedding attire and it’s supposed to be a heartwarming scene but I’m just not a fan of Hayden Christensen and Natalie Portman’s smooching scenes. Ugh. Hence, my least favorite romantic moment.

Padme looks beautiful in that rainbow dress but… 😵

Padme had not seen Anakin in ten years, she was with him for what, three or four days? Maybe at the most a week! And she truly, deeply loved him? Really? That’s not realistic and Hayden and Natalie’s unconvincing chemistry didn’t help matters.

People have been waiting for these two to kiss for two years straight but…this kiss had zero emotional value to it. Look at Rey. It almost feels like an on-the-fly kiss on a Saturday Night Live sketch that is discussed between the two actors with zero rehearsal or anything. And then he dies! This movie is terrible.

Han and Qi’ra’s relationship was one of the more romantic in this franchise but their romantic scenes weren’t that stirring to me. And while this sequence is emotionally impactful because of Qi’ra’s ultimate decision to let Han go it just doesn’t hit my emotions as much as it could.

I remember when I watched Solo for the first time. I would’ve never guessed that Tobias Beckett and Val were a couple so imagine my surprise when they kissed. I was like, “WHAAAAAT!” I love this scene though because here they are, two middle-aged smugglers who have been through who knows how many adventures, just waiting for their big break. Too bad Val died. 😦

15. The Kiss in the Cape Closet

If you’re a fan of passionate kissing scenes this is one for you because Han and Qi’ra were definitely reacquiring themselves with each other in this romantic cape closet sequence.

It took four seasons but it finally happened. Kanan and Hera are so sweet and undoubtedly have one of my favorite love stories in the franchise. Of course, because it’s Star Wars, things don’t end well.

Poe’s love life has been a mystery for a while. He never had a definitive love interest, well, that is unless you figured that his relationship with Finn was a little more than previously perceived. However, The Rise of Skywalker introduced a previous old flame back into his life in cool spice runner Zorii Bliss and though there’s no kissing or anything like that this scene oozes a nice hint of romance.

12. Satine Tells Obi-Wan She Loves Him

Who would’ve ever thought Obi-Wan Kenobi had a girlfriend but he sure did and boy was their relationship riveting. Duchess Satine Kryze and Obi-Wan knew each other from the days when he was a padawan but it wasn’t until their later years that Satine finally confessed that she loved Obi-Wan. It’s such a surprising development for a character who I would’ve never thought had a romantic attachment and it’s easily one of my favorite romantic moments in the franchise.

I love Jyn and Cassian’s relationship in Rogue One and in the end, at least they were able to be together as two kindred spirits fighting for a better life for the galaxy.😢

Leia is off the chain, we all know this, but the fact that she was the one to rescue Han makes this scene all the more enjoyable. Girl power!

9. Hera Tells Kanan She “Loves Him”

Hera was always afraid to grow too attached to Kanan because the life of a rebel is constantly fraught with the potential of losing those you love but finally when she tells him she loves him…that’s when he dies. Why are you so cruel Star Wars?!😭😭😭😭 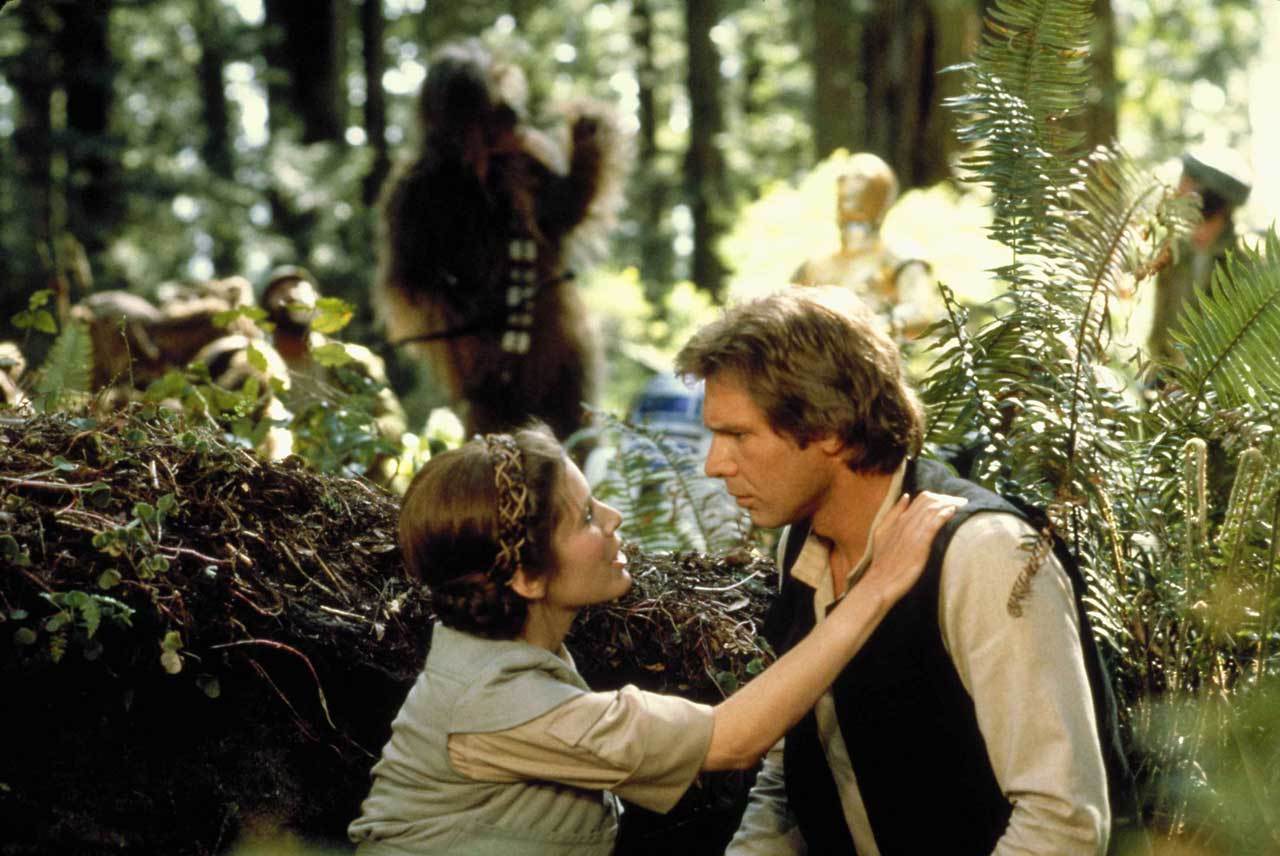 The second Death Star had just been destroyed, the war was over, the Empire was defeated, and Han believed his relationship with Leia was coming to an end, for he thought she would ride off into the sunset with Luke Skywalker. Leia made sure to reassure with him a kiss that she was indeed in love with him (for obvious sibling reasons) and would be with him as long as their lifespans permitted them. Ah, so sweet.

To some, this may not seem like a romantic moment but ever since I watched this scene for the first time I felt the connection between Finn and Rey at that moment was downright romantic. He could’ve easily kept the truth of his identity a secret but he told Rey the truth and she accepted it. Oh, I love this scene.

When Rose was introduced to the Star Wars galaxy in The Last Jedi it was presented that she would be on a top-secret mission with Finn. I knew they would become friends and that things could turn slightly romantic between the two characters but I had no idea things would escalate in the way that they did. At first, I didn’t like this scene very much but the more I watched it the more emotional I became and now when I watch this scene I get teary every time. Finn’s surprise is so real feeling and Rose’s love is so palpable at that moment. I love Finn and Rey’s friendship but oh, I’m hoping for a happy ending with Finn and Rose too. They’re so sweet.

Oh my goodness, I love this scene so much. It feels my heart with happiness every time I watch it and reminds me why their relationship will always be one of my favorites in Star Wars.

Why is there the phenomenon, Reylo? Because of eye-widening scenes like this. If you had told me Rey and Kylo Ren would be touching fingers in a hut, at night, by the romantic light of a campfire I would’ve thought it was a joke. No, it wasn’t a joke and I am so happy about that fact. Kylo Ren and Rey are like two peas in a pod, absolutely meant for each other. (Too bad this romantic tension led to one of the corniest kisses in the franchise.)

3. The Kiss in the Millennium Falcon

Han and Leia’s love story is one of the best-written love stories I’ve ever watched and the scene featuring their first kiss is as riveting as it gets. From the heart-pounding zoom in to the hilarious interruption by C-3PO this scene is literally perfect from beginning to end, hence it’s clearly one of my favorite romantic moment in this franchise.

2. Kanan and Hera in the Alley

Okay, seriously the first time I watched this scene I was like, “OOOOOOHHH!” For the first three seasons of Star Wars: Rebels I could never fully determine how deep the romantic relationship was between Hera and Kanan. Yeah, she called him “love” and they were the surrogate father and mother of their rebel group but it wasn’t until this moment where things turned ULTRA-romantic.

Whether it’s a cartoon or not I felt this scene. 👀

When you think of Star Wars romances Rogue One isn’t the first film that may come to mind but LORD HAVE MERCY this scene is eye-widening romantic. No, there is no kiss and the moment lasts only several seconds but with the pulse between light and pitch-blackness leaving their faces in shadow and the clear love in Cassian and Jyn’s eyes, it’s very lovey-dovey. 😳

So, this is my ranking of the romantic moments in Star Wars from worst to best. What is your favorite romantic moment in this franchise? Feel free to share your thoughts in the comments below.

I thank you for reading and I hope you have a romantically beautiful day. May the Force be with you.

2 thoughts on “Ranking the Romantic Moments in ‘Star Wars’; from Worst to Best”