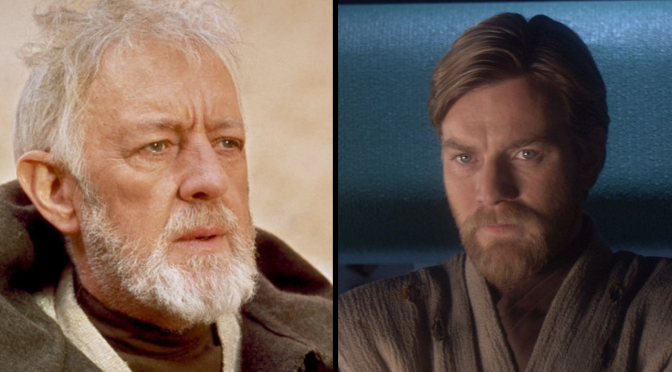 Obi-Wan Kenobi is one of the most beloved Star Wars characters for one simple reason; he’s awesome. He wowed fans when he was introduced as the Star Wars version of the Wizard Merlin in A New Hope. And he was easily the coolest character in the often harangued prequel trilogy. So, on this week’s segment of Who’s Your Favorite I’m tackling one of the greatest Jedi that has ever lived; Obi-Wan Kenobi. Enjoy!

Obi-Wan Kenobi might’ve died in A New Hope but he lived on in ghost form throughout the classic trilogy, randomly delivering Luke wisdom and being awesome. One of my favorite scenes in The Empire Strikes Back is when Obi-Wan Kenobi visits Luke in Hoth. It’s the first time we see Obi-Wan in physical ghost form and it’s always fascinated me seeing him standing in the snowy gloom telling Luke to go to the Dagobah system. Old Obi-Wan is awesome.

I grew up on the young Obi-Wan Kenobi and I have to say, even with all of the prequel’s faults and annoyances Ewan Mcgregor’s take on the beloved Jedi, Obi-Wan Kenobi was 100% superb. He took a character that, for the most part, didn’t have a lot to do in the original trilogy and made him just as lovable, perhaps even more so, than the original Obi-Wan.

His story was exciting to watch during the prequel trilogy and he was even awesome in The Clone Wars series. All in all, Obi-Wan Kenobi will always be one of my favorite Star Wars characters.

So, which of the two Obi-Wans is your favorite? Mine is the young Obi-Wan Kenobi because he was such a bright light in the sometimes murky prequels. When the prequels could be annoying at times Obi-Wan always managed to make me smile.

I’d love to hear your thoughts in the comments below and I thank you for reading. Have a beautiful day and May the Force be with you.