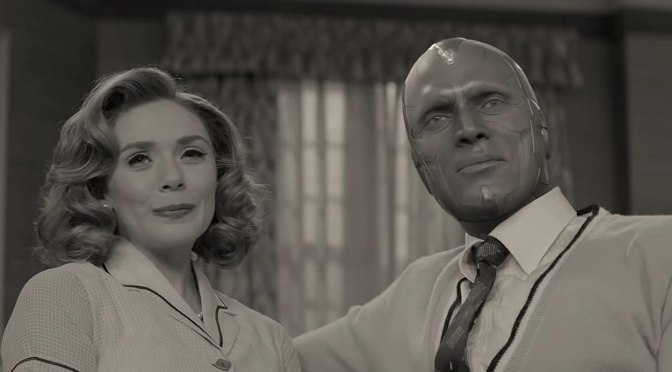 Yes! Finally! Marvel Studios has given us a tangible look at something new and it isn’t The Falcon and the Winter Soldier (😭) but instead is WandaVision (😁). I’m so ready for this show because this trailer looks fantastic in all of its weirdness. There’s a moment that struck me, I mean it literally made me gasp and stop in my tracks. I’ll talk about it in a second but first, here’s the trailer.

Okay, about that moment that made me say, “Oh snap.” There’s a brand new character named Agnes we’re seeing in this trailer played by who appears to be Kathryn Hahn. Vision touches her and she gasps when snapped out of her trance before saying, “Am I dead?” He responds, “No. Why would you think that?” And she says, “Because you are.”

Oh my gosh, what is happening?!

Paul Bettany and Elizabeth Olsen have both expressed how strange this Disney+ series will be and I think we truly are getting a show that features Wanda losing control of her reality after she goes completely bonkers and creates her own reality to cope with Vision’s death. It’s a storyline that has been created in the comics and it looks like Marvel Studios is bringing that story to life.

Now, along with the mysterious trailer, we got a mysterious no-release date. Instead, we got simply Coming Soon which makes me wonder if we will be getting it in December or maybe even sooner?

This is so weird…but I love it!

Honestly, I’m just ready to see my favorite Marvel superheroes. I miss them so much I’m watching old James Corden moments with the cast of Infinity War on Youtube. Lol.

All in all, it’s a nice time to be back.

I thank you for reading and I hope you have a fantastic day. I’m back! 😅