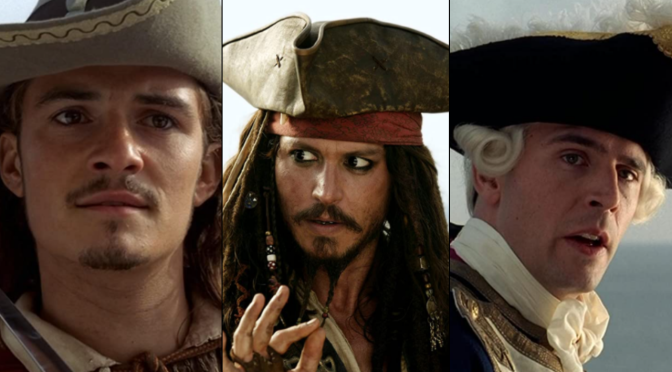 My sister and I have been reacquainting ourselves with the Pirates of the Caribbean franchise and we realized something rather hilarious. Every guy that Elizabeth Swann has ever kissed…DIES!

Jack Sparrow was the first to die after kissing Swann in an oopsy-daisy passionate smooch that turned out to be the ultimate swindle, leading to Sparrow’s abrupt departure to Davy Jones’ Locker via the gut of the Kraken.

Then Norrington, the man who wanted Elizabeth to be his wife in the first Pirates movie, ended up having to save Swann from Davy Jones’ clutches. In doing so, he gives Elizabeth a goodbye kiss and a moment later gets run through by a sword wielded by Will’s own father, which is a bit ironic. Lol.

And then last but definitely not least, there is Will who, after finally getting married to Elizabeth in the middle of a raging battle and sharing a passionate kiss in a rainstorm.

And we can’t forget Pirate Lord Sao Feng in all of this who sneaks a kiss on Swann before seconds later getting blasted by a cannonball and left with a chest full of wood.

To be in a relationship with Swann is obviously a deadly affair and that, in hindsight, is rather comical.

What do you think about this observation? Feel free to share your thoughts in the comments below.

4 thoughts on “A Hilarious Thread That Connects These Three Characters”