It wasn’t but a few steps from her quarters when Top Lieutenant Nienye, clad in a black tunic, pants, and boots enhanced with leather across the bodice, shoulders, elbows, and knees, approached her.

“Lord Maul is contacting you,” he said.

At other times her heart would’ve skipped a beat and she would find herself trembling with worry or worse, fear. Instead, she simply nodded, passing him in the hall and heading to the meeting room. He stared after her with a concerned expression.

She entered the room and immediately went over to a nearby console where she pressed a button. The windows darkened and a hologram appeared revealing Maul sitting as he always did with that hood hiding his black and red face in shadow.

“You’re playing a dangerous game, Qi’ra,” were the first words he spoke.

A smirk touched her lips. “So I’m guessing you already understand the situation.”

“I know more than you know,” he replied.

She didn’t like the way he said that. Was he possibly watching her at all times? Did he listen in on her conversations? If so, she would have to be careful where she said things in the future.

“I also know that it’s too dangerous to try to reclaim the coaxium from the rebels,” he continued.

Her eyebrow cocked. “It’s dangerous to take back what is rightfully mine?”

He leaned forward as if angered by her arrogance. “You could die, jeopardizing Crimson Dawn’s reputation. My reputation.”

“And if we let the rebels keep the coaxium for their own gains instead of delivering to the Empire like we were supposed to we don’t look bad?”

“At least we won’t look foolish.”

Darth Maul took off his hood, revealing the true extent of his anger. His temples bulged and his yellow eyes flared with venom.

“And when did you suddenly decide that you were special enough to practically take on a suicide mission?” he asked, his voice oozing menace.

“It’s not a suicide mission if I survive,” she replied confidently.

His jaw clenched. “You’ll be heading into enemy lines with barely an army. Who’s going to help you because believe me, I’m not sending any of Crimson Dawn’s forces or allies to your rescue.”

“I don’t need a rescuer. I have my own team to handle this.”

As quickly as his anger had arrived he leaned back in his chair, regarding her with a careful gaze.

“You have gumption,” he said quietly. “But I guess that’s why I wanted you to be the new face of Crimson Dawn.”

She smiled. “The coaxium will once again be ours, Lord Maul,” she announced.

With his expression still grim, he said, “Words are cheap. Prove it.”

With that, he ended the transmission. Qi’ra’s jaw clenched and her hands tightened into fists. All her life people had looked down on her. Believed that she wasn’t good enough to lead or to trust.

Well, she would show him, as she showed everyone else. 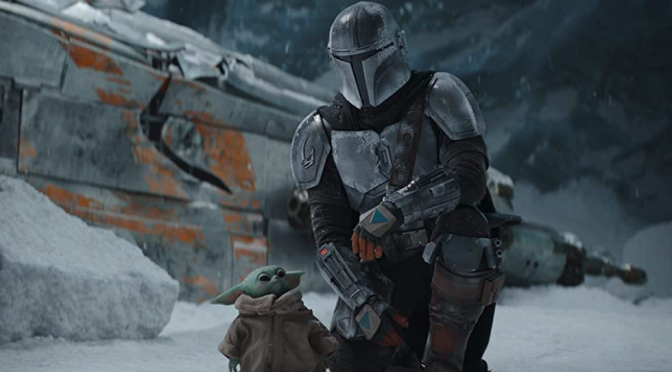 It’s a startling realization knowing that three Saturdays from now I will have seen the first episode of the second season of The Mandalorian. Yeah, that episode that will reintroduce us to our newest favorite Star Wars duo, Mando and Baby Yoda. The episode that could potentially feature Boba Fett. The episode we’ve been waiting for for nearly a year!

I’m ecstatic, I’m elated, but to be honest, I’m also a little anxious. The Force Awakens was great…and then The Last Jedi and The Rise of Skywalker left me sometimes very pleased but at other times very dazed and confused. It’s already been said that this season will stray from following Mando and The Child for the entire duration of the season, instead choosing to focus on other characters. Will that be a good move? We’ll see, I guess.

What gives me hope, however, is Dave Filoni who has proven over the years the ability to tell a good story from beginning to end. Just look at The Clone Wars and Star Wars: Rebels. These stories were good but they only got better and better and better. If The Mandalorian follows the expected trajectory we could get a really, really great story in this second season and I am ready for all of it.

I’m a diehard Star Wars fan, as you already know. I have watched every movie at least five times and the first six films at least three hundred times combined (at least.) The Empire Strikes Back is considered the best of the Skywalker Saga and Star Wars stories and after seeing it in theaters for the first time yesterday I understand why.

The movie, once it gets rolling, is nonstop! I was blown away as I sat in my local theater taking in a film that, in 1980, was truly a masterpiece. Even now, after seeing so many movies, this film stands out as a marvel, a true achievement of movie making that has passed the test of time.