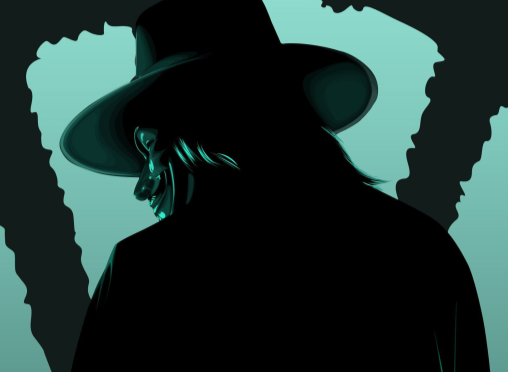 What a superhero film! Whoa. V for Vendetta is unlike anything I’ve ever seen before of this genre, led brilliantly by Natalie Portman as a young woman named Evey who meets him…V, perfectly portrayed by Hugo Weaving who delivers my favorite performance of his yet. Oh my goodness, wow!

If you’re wondering who exactly “V” is he’s basically Batman; a British vigilante who becomes a symbol to fight oppression. This film, part of DC Comics’ vast repertoire of stories and based on a graphic novel, feels so relevant now in our time when the world feels like it’s on the verge of flames.

It seems like there is so much hate in this world and “V” was a fighter against such hate. The film deals with homophobes, islamaphobes, government oppression, and simply fear in general, releasing the oppressed from their shackles and showing them a new way forward.

Its real-life message feels so much more impactful than Joker‘s service announcement to be nice to people just in case they may turn into a true blue maniac like the Joker. That’s not a bad message, mind you, but V for Vendetta had a real story to tell. I found myself drawing so many parallels to the very images and stories I see every single day and well…I was just blown away.

V for Vendetta is undoubtedly one of the most fascinating movies I’ve ever seen and “V” is one of the coolest characters ever!!!! Hugo did such a great job conveying so much emotion (and coolness) to a faceless hero that can you blame Evey falling in love with him? Geez. And the music is AMAZING!

Well done, movie makers of V for Vendetta. That was good.

I’m giving this movie 5 out of 5 stars and 95 out of 100. It was a very well made and thoughtful film and I’m glad I took the time to sit down and watch it.

DC Studios: The Brave and the Bold To Introduce The DCU’s Bat-Family