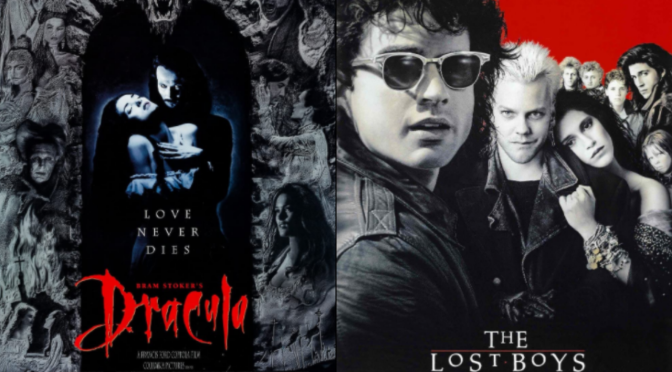 So, this past Monday night, something totally random happened. My family and I were sitting watching television trying to find something to watch when the clock struck 8:00pm (because we didn’t particularly want to watch Monday Night Football this week) and wound up on BBC America which was airing Bram Stoker’s Dracula. My father has two vampire movies he always mentions: Bram Stoker’s Dracula and Interview With the Vampire, so when he saw it was on he said we should check it out. And we did. In fact, we ended up watching the whole thing!

Was Bram Stoker’s Dracula the best movie I’ve ever seen? No…but it was pretty fascinating.

This is the original story of Dracula, the story that inspired so many writers following Bram Stoker’s genius tale that now there have been a gazillion different versions of the story. I think what I loved about this version was how dark/romantic it was. There was a true sense of rawness that Francis Ford Coppola was able to convey in just how awful it would be to have Dracula wanting to make you one of his latest victims.

Plus, I never knew that Dracula could transform into so many different things; a bat creature, a werewolf, an old creepy man, a young dapper fellow, green mist, I mean, Dracula’s no joke!

His vampire ladies were also creepy as crap…and so was he, for that matter.

However, got to say, I loved this dapper look with the shades. That is hands down the coolest look I’ve seen from any Dracula. No wonder this movie won an Oscar for Best Costume Design.

All in all, I’ll remember Keanu Reeves in this movie for two reasons only; him getting sucked on by those lady vampires *shudder* and that ridiculous English accent that he seemed to forget half the time. I really liked Anthony Hopkins in this movie as the vampire hunter that he was, Cary Elwes was hilarious again (honestly, I think I’m always going to find him funny after seeing him in The Princess Bride,) Winona Ryder was visually perfect as Dracula’s long-lost love but her accent was also getting on my nerves, and I think it’s safe to say that Gary Oldman was a great Dracula. I mean, he’s pretty much the best Dracula I’ve seen but I’ll have to see Christopher Lee’s version before I give a final verdict.

It’s a good movie and I see why my father was talking about it but I’ll most likely never watch it again unless showing a friend.

And then, after Bram Stoker’s Dracula it just so happened that The Lost Boys was coming on afterward. We definitely weren’t intending to watch the entire movie but it kind of grasped us and never let go.

I thought this movie was hilarious and really, really enjoyable. It could’ve easily been ridiculously bad, in which case we would’ve turned the channel, but it happened to be riveting enough to keep us from doing so.

What was even more fun was that my parents, despite knowing and having seen a ton of 80s’ movies, had never been interested in watching The Lost Boys so we were all watching it for the first time.

I really loved it. It wasn’t too scary (thank god) and it honestly just kept me laughing. I thought the characters were great and the ending was perfect. All in all, it was my favorite film of the night.

That was really fun. Next up, Halloween on Friday and then Saturday my sister and I are going to try to watch a bunch of scary movies…or maybe just one, we’ll see.

Until then, I thank you for reading and I hope you have a wonderful day.

2 thoughts on “I Watched Two Vampire Movies This Halloween Week!”