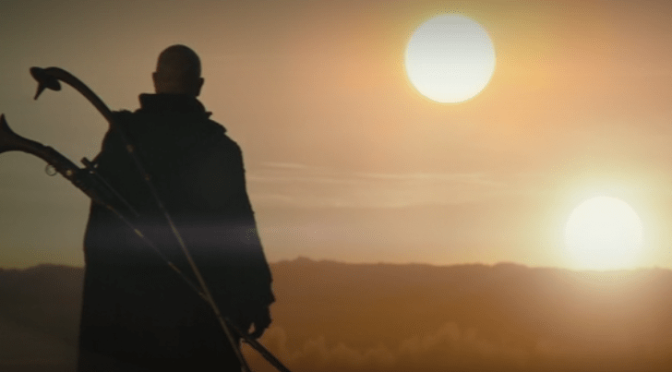 The end of the latest episode of The Mandalorian was a doozy. I mean, wow!!!!!

Boba Fett is back, just not in the way we expected. We all assumed that Fett would return clad in his green armor, potentially sporting a long cape like the mysterious individual seen at the end of Chapter Five: The Gunslinger. Nope.

His armor was worn by newcomer Cobb Vanth, played by Timothy Olyphant. Vanth was a marshal of a small town called Mos Pelgo who obtained the armor from the Jawas and used it to help defend his town from various invaders.

It was a rewarding twist that brought a smile to my face as we got to see the armor in a new light. Plus, the detail accentuated to its even more ragged look was outstanding.

So yeah, Boba’s no longer a Mandalorian armor-wearing fella as we expected. He’s a man of the dunes; sporting new weapons, a cloak, and looking so AWESOME!

I can’t believe it. The thought that we’ll see him in the next episode is just…oh, what’s going to happen. Will he join Mando in his quest? Will he fight Mando? What will he think of The Child? We know he’s familiar with the ways of the Jedi but of course, he doesn’t like the Jedi because it just so happened that a Jedi killed his father. So how will he react to Baby Yoda? We’re five days away from these questions being answered and woo, I’m ready!

What burning questions do you have of the next episode?

One thought on “Let’s Talk: ‘The Mandalorian: Chapter 9’”