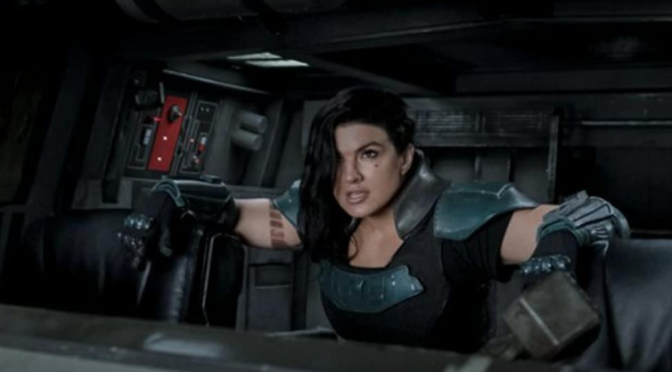 The latest episode of The Mandalorian wasn’t exactly as high-octane as Chapter 14 was but it was really, really good in a deeper way. We got some stirring character development that’ll probably have some consequence later on down the line and some hilarious moments that made this easily one of the best episodes to date. So, with no further delay, let’s dive down deep into this episode’s greatest moments.

The fact that we got to see Mando in a stormtrooper outfit was undoubtedly the highlight of the episode for me. I never knew I needed this but it was so hilarious. And yeah, his fight on top of the vehicle was also my favorite scene in the episode. I love Mando and his butt-kicking skills.

Of course, we have to talk about this scene which was fraught with tension. Oh my gosh, I have never been more uncomfortable with an unmasking scene in my life!

First off, we have to acknowledge that Din Djarin’s face is now forever in the archives of the Empire. Oops.

Secondly, we have to also realize how powerful this moment was for Mando. He cares about Grogu so much he was willing to do anything, even go against his personal code as a member of The Watch, to remove his helmet and get the information he needed to save the baby.

And then, the acting from Pedro Pascal during this scene was top-notch. His vulnerability left him literally speechless. It was like he was a child again, frozen in a situation that scared him so badly he was practically incapacitated. It wasn’t until his helmet was back on that he once again found his confidence to be able to talk. I actually kind of feel sorry for Mando. He’s got some real issues that he’s got to deal with in the future of the series, I’m sure.

And then of course there was this moment that left me giggling with glee. Those seismic charges native to the Fetts are my favorite bombs in movie history and to see and hear it again was just so rewarding.

I’d also like to speak a little on the character development surrounding Mayfeld who absolutely stole the show in this episode. He wasn’t just a side character who brought nothing to the episode but comic relief like Mythrol in Chapter 12: The Siege but he actually added to the depth of the episode. Now, am I happy that he got to see Din’s face before Grogu?! No…that’s kind of upsetting. But it doesn’t matter.

All in all, this episode was another fantastic addition to the story and next week…things are going to go down!

I thank you for reading and I hope you have an amazing day.

The Cast of Willow Share Stories From The Set