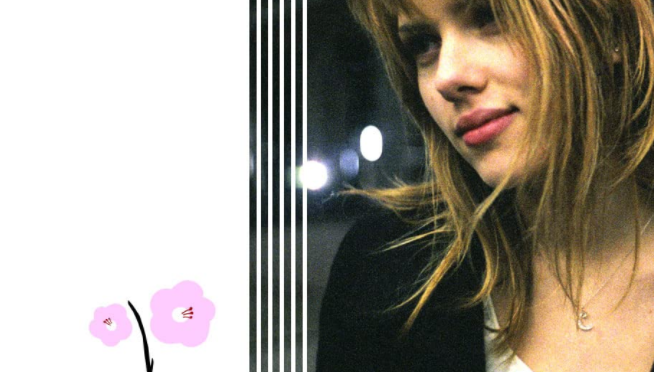 My mother has been talking about Lost in Translation for a while now and how good a movie it is. I finally saw it the other day and yeah, it is a great film.

Sofia Coppola, who wrote and directed the film, won an Oscar for Best Original Screenplay and deservedly so. This movie is a beautiful story of two people who find themselves rethinking their lives in Tokyo, Japan who just so happen to run into each other and form a beautiful friendship. These two characters being Scarlett Johansson’s Charlotte and Bill Murray’s Bob Harris.

Charlotte is a young woman who is questioning her two-year-old marriage with a young photographer whose investment in her seems like a second thought. And Bob Harris is a faded actor who’s in Japan trying to sell advertising for a whiskey company. His twenty-five-year long marriage is getting a bit stale, he’s slightly annoyed with his wife who seems to barely have time to talk with him across seas.

Charlotte and Bob’s relationship in this movie is a beautiful twist on the idea of two people having an affair. Even though they’re married and even though their feelings for one another can be seen as slightly sexual, Coppola writes them in a way where they feel cemented as good friends, not sexual partners. And I appreciated that!

Bill Murray is so much older than ScarJo in this movie (she was eighteen at the time and he was fifty-three) that the idea of them being in a super romantic relationship would’ve been really off putting. Coppola’s borderline non-sexual approach, however, told a different story. A more meaningful story that touched me and left me so pleased at the end.

This movie put Scarlett Johansson on the map and for good reason. She did such a great job in this film, delving deep into the quiet moments of this movie with such feeling while also displaying the fact that she was a young woman trying to find her place in the world. And this may be my favorite Bill Murray performance that I’ve seen. His classic brand of humor perfectly melded with the darker seriousness of the movie, entailing a delightful story that I just really, really love.

And of course, what did he say to Charlotte at the end?! I’ll delve into my hypothesis in a later post.

One thought on “Movie Review Flashback: ‘Lost in Translation’ Is Such a Good Movie!”