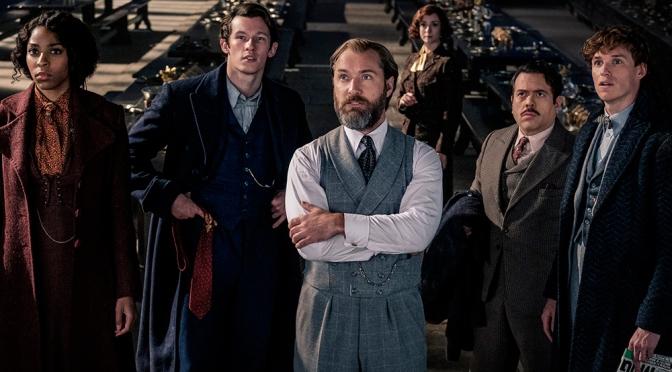 The third Fantastic Beasts movie is coming out in April (yeah, that was quick) and marketing is starting to ramp up for the film. Am I excited about it? Not really. Will I watch it in theaters? For sure, but this story feels like the Sequel Trilogy to me, all over the place.

When the first one came out six years ago it felt like a fresh new story with brand new characters. And then, like Warner Bros. pressured Peter Jackson to incorporate more connections to The Lord of the Rings in The Hobbit Trilogy, the Fantastic Beasts franchise has become the Dumbledore show.

Instead of focusing primarily on Eddie Redmayne’s Newt Scamander and his journey to find fantastic beasts, hence the name of the franchise, the five-part saga has become a prequel to the story we all know and love, the Harry Potter movies. I guess it’s for the best but when the posters came out earlier this week and I saw how many characters are in this new story I realized that this story may just be a bit too dense to save anymore. We’ll see after the new trailer comes out today. For now, here are ALL of the posters. Enjoy!

Dumbledore and His First Army

Grindelwald and His Army

Yeah, one of the problems with Crimes of Grindelwald was the fact that it had too many characters. Instead of reducing the story to focus on the main characters we’ve got even more people to follow. I’m already tired just thinking about it.

Oh, and there are still two people missing from this extensive lineup: Tina Goldstein and Nagini. They have seemingly been erased from the story even though the last movie ends with them going to Dumbledore along with Newt Scamander, his brother Theseus, and Yusuf Kama. Why is that the case and will it mess up the story’s continuity? It’s all very interesting. Let’s hope the new trailer is decent.