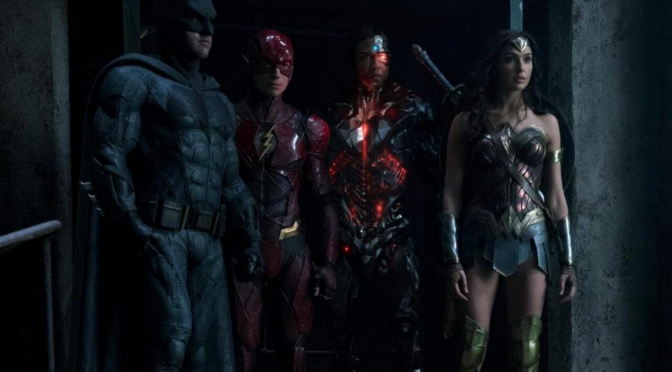 I heard the critics and all of their opinions on Justice League. They said it wasn’t a movie worth watching, that it was a huge step backwards from Wonder Woman, and I believed them, that’s why it took me until yesterday to see it. And now that I’ve seen it I’m so glad I did. I have to admit, I enjoyed Justice League immensely. I watched the entire film, credits and all, thinking at any point that the movie was going to turn south and I was going to regret ever coming to see this superhero flick but it never happened! The story was simple yet cohesive, the characters were great, and yes there were flaws but overall I had a great time watching this movie. So, on that note I’m going to tell you all of the things I did and didn’t like about this film. Enjoy!

SPOILER ALERT! If you haven’t seen Justice League yet and you would rather stay in the dark about the movie’s premise and outcomes I would advise you to discontinue reading this now. Okay, I thank you for acknowledging this warning. Now to the review.

END_OF_DOCUMENT_TOKEN_TO_BE_REPLACED

Marvel has been the king of blockbusters for the last seven years and for good reason. Their movies have been sensational to watch and besides the Batman movies directed by Christopher Nolan which ended this decade there haven’t been any superhero flicks to top the Disney owned franchise. DC Comics has tried to become a competitor in the superhero genre with their occasional films like Green Lantern. That flick failed terribly and to make it even worse Ryan Reynolds, the actor who portrayed the green wearing superhero, played Deadpool, a character in Marvel, and it was a smashing success. DC Comics kept trying to make epic films but audiences did not respond well to the movies. Now I enjoyed Batman vs. Superman: Dawn of Justice and Man of Steel. I thought that Man of Steel was a well made movie with an epic score and an awesome villain. Batman vs. Superman was enjoyable because it had a lot of dialogue and there was an intenseness about the movie I enjoyed. There were mistakes like Lois Lane being in the middle of everything and their casting for Lex Luthor but all in all I truly enjoyed this film.

Now it’s a new year and DC Comics has decided to come swinging with two movies this year. The first is Wonder Woman which will be coming out in June. It looks like the first half of the flick will be very enjoyable but the second half seems to be filled with slow motion, a semi-epic fighting sequence, and not that great of a story. It’s been nearly two weeks since the latest Wonder Woman trailer came out and now DC Comics has brought out their first official Justice League trailer. Take a look.

After watching this trailer I was thoroughly impressed. I’m not a fan of epic movie trailers containing guitar style music but this worked. There were so many great elements to this trailer that I’m seriously pumped.

First of all, did you see Aquaman?! I have never thought Aquaman was cool from the cartoons with that blond hairdo and his orange and green scaled suit. I guess Warner Bros. didn’t think that would be too cool as well so they got this new guy to play Aquaman and he is incredible. He’s tall and lean, his suit is a very appealing color, his trident is so cool it’s undoubtedly going to become a great prop for Haloween, and his abilities seem to be very powerful. I can’t wait to see him in action in the film.

The second coolest person in the movie was once again a surprise because it was Flash who I thought looked amazing. Flash’s action scenes are going to be so much fun to watch and his suit looks great.

I also enjoyed seeing them put a little bit of humor into the trailer because a lot of peoples’ complaints about these DC films were the fact that they are so dour.

There were also some great moments in the trailer like a flash of what looked like two huge armies facing off in what seemed like an appalling battle scene. There was the last bit with Aquaman on top of Batman’s car which screams EPIC! And there was just a lot of beautifully CGI’d fighting scenes that had me beaming with excitement.

The main reason why I believe this movie is going to be a success is because they didn’t really show anything. Yes it looks like they’re going to have to defend Earth from a bunch of scary looking aliens but who’s going to be the main villain? And obviously Lois Lane is going to be in the movie so that’s interesting because you know, wherever she is there’s always something happening.

Not only was the trailer’s content fun to observe but it was aesthetically appealing to the eyes. It was so gorgeously epic and clear that whether the story will be good or not it’s going to be spectacular to watch in IMAX.

Is there anything negative about this trailer? Not really. I do hope there’s some reduction on the slow motion for Wonder Woman’s fighting scenes. Cyborg could definitely be a little cooler. I never imagined Cyborg looking like that if he was real but I guess it’s difficult to make a man/robot look as epic as someone like Aquaman. Everything else however was five stars.

Yes Wonder Woman is the first DC film to come out this year but I think Justice League is going to be the movie that’ll redeem the epic brand. This movie wasn’t at the top of my must-see list but after that incredible trailer I’m excited for November.

Well that’s my thoughts on the new Justice League trailer. Thank you for reading my post. I hope you enjoyed the trailer and I would like to wish you a beautiful Monday.