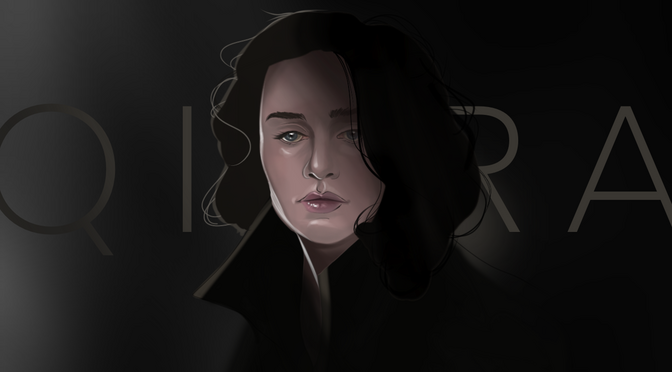 T-38 and Top Lieutenant Nienye sprinted through the city’s streets, dogfights transpiring overhead as Qi’ra’s aerial support clashed with Enfys Nest’s band of Cloud Riders who zipped by on their speeder bikes.

Nienye didn’t want to leave Qi’ra to face Enfys Nest alone but she had ordered him to. Still, he knew Enfys was a formidable foe. Formidable enough to end Qi’ra if she wasn’t careful. He didn’t know what he would do with himself if he left her only to return and find her killed by Nest’s hand.

T-38 was feeling the exact same, her thoughts distracted by the possibility of leaving Qi’ra to a grisly demise. But, Qi’ra was their leader, they had to obey her orders, and Qi’ra’s confidence gave them solace that she would prevail.

As they rounded another corner, a Cloud Rider crashing in a ball of flame to the street before them, T-38 said, “The coaxium is just ahead.”

Nienye unfurled his spear as a wall of rebels suddenly appeared in the street ahead of them. The rebels, clothed in rugged dark clothes, were barring their way forward, their blasters trained directly on them. And then, behind the rebels, appeared a fully functional AT-ST Walker.

T-38 cursed. Nienye gasped. The AT-ST Walker shot at them.

DC Studios: The Brave and the Bold To Introduce The DCU’s Bat-Family