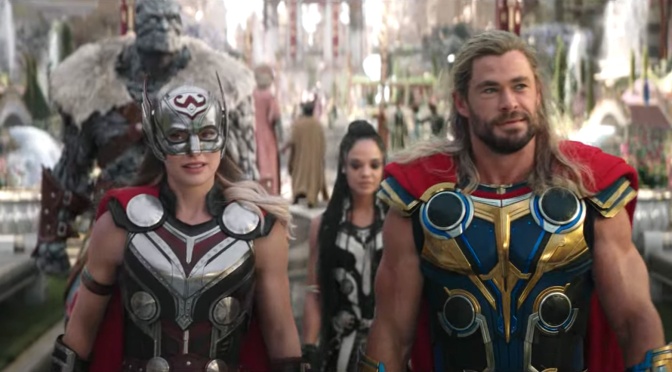 On Saturday I went to see Thor: Love and Thunder with my family, totally expecting to like some of the movie but ultimately coming away from the film with some kind of disappointment. Instead, I enjoyed the film thoroughly from start to finish. So now that the weekend is over let’s talk about this film and all of its exciting (and emotional) moments throughout.

It’s been a while since we’ve seen Thor. The last time we saw him he was joining the Guardians after saving the universe from Thanos. He was more content with his place in the universe, having passed on the kingly duties to Valkyrie so that he could choose a path of being an epic, carefree space Viking.

Waititi has done a great job pushing the character of Thor forward with some very powerful character development. What Thor faces in this movie compared to past stories is his challenge with love.

In an early montage detailing Thor’s life from infanthood to his more recent weight loss escapades, we see that he has been in fleeting romantic relationships before. It is his love for Jane Foster, however, that is his most meaningful romance.

Despite his romance with Jane being one of the downsides of the first two Thor movies, Waititi finds a way to make their story meaningful in this film, for that is the driving force of this movie.

For Thor, he has lost everyone he has ever cared about. And then in flies Jane, with a new hammer and a new look, and he’s absolutely smitten being in her presence again.

For once, I was actually into the Thor/Jane romance. Waititi found a way to perfectly detail their feelings for one another, their complicated break-up, and their willingness to get back together because, at the end of the day, they love each other.

I also loved that Waititi made Thor even funnier in this film without watering him down. He felt, at times, more powerful than he has been in previous installments which I loved while once again showcasing Hemsworth’s talent for comedy.

Plus, the gold and blue suit is undoubtedly my favorite outfit of his. I never really paid attention to his outfits but this one really stood out for me.

Natalie Portman hasn’t been in the MCU in a meaningful role since Thor: The Dark World which came out nine years ago! Yes, nine. And I was happy about it.

Jane Foster felt like a meaningless addition to the first two Thor movies. But Waititi knows how to revamp a character in a powerful way and he did exactly that with Portman’s instantly lovable Jane Foster in Love and Thunder.

Like the comics, Jane Foster has Stage IV cancer and eventually gains the power of the Mighty Thor. And yes, she was utterly fantastic as Mighty Thor.

Natalie Portman has always been good at playing strong female characters and this was no exception. It was nice and a bit surprising, thanks to Waititi, to see Portman embrace a bit of her funny side as well. I loved seeing her crack jokes, try to conjure up a decent catchphrase, and want to kill bad guys. She was so perfect in this movie.

But, because Portman is an Oscar-winning actress, she brilliantly handled the serious moments as well. Her battle with cancer and her choice of being a hero despite the fact that it was killing her was a powerful storyline that left me weeping at the end.

I’ll touch more on that later but for now, yes, I need a Mighty Thor Funko Pop.

Oh, and she undoubtedly has one of the most iconic quotes in the MCU in my humble opinion: “First off, my name is Mighty Thor. Secondly, if you can’t say Mighty Thor you can call me Dr. Jane Foster. And third, EAT. MY. HAMMER!!!” It’s giving me chills just thinking about that fantastic moment.

Valkyrie has been one of my favorite female superheroes in the MCU since her debut in Thor: Ragnarok and that is still very much the case after this movie. In Love and Thunder, we get to see her taking the duties of Asgardian King seriously. She’s doing Old Spice commercials, has turned New Asgard into a tourist destination, and she’s an all-around bad*** warrior which is no surprise.

Because the theme of this film centered around the idea of love we get to delve deeper into her past with the Valkyrie. In Ragnarok we see her fellow warrior sisters get annihilated by the Goddess Hela and she is left as the only survivor. This movie only reiterates that tragic storyline by reminding us how much she still misses that sisterhood that she had known for so much of her life.

Her bond with Jane was nice to see. In fact, their dynamic was worthy of a spinoff. Let’s hope we still get that spinoff somewhere down the line.

This movie also didn’t refrain from officially revealing her sexuality by mentioning her Valkyrie girlfriend and allowing her to kiss the hand of one of Zeus’ beautiful maidens.

I wished we could’ve gotten a little more time with her but her role in this film was perfect. Now let’s get her that much-needed spinoff so she can get a meaningful storyline.

Everyone’s favorite rock dude is back and funnier than ever. I loved Korg in Ragnarok and he was just as hilarious in this film, if not funnier which I wasn’t expecting.

Like Valkyrie, Waititi made sure to let the audience explicitly know that he is gay and that his entire species is male. They even explain how his species make more rock children which was a bit odd and kind of hilarious.

Even though it is nice to see this type of representation in the MCU it definitely felt a bit forced considering that Korg mentions having a mom in Ragnarok. But I guess we’ll forget that detail.

Waititi made Russel Crowe hilarious and that alone is why this is one of my favorite MCU movies. His portrayal of Zeus was actually one of the most accurate I’ve seen to the actual lore from mythology that I’ve read. I mean, Zeus married his sister, Hera. I don’t think that’s a guy that is someone worth idolizing and Waititi drove that home in this film.

When I heard Christian Bale was going to play the antagonist in Love and Thunder I was already excited but he honestly exceeded my expectation in this film.

Christian Bale is a phenomenal actor and he did such a great job in this movie. The opening scene with him made him a character that was more than a villain but that didn’t mean he wasn’t scary when he needed to be. There were a lot of moments where you could feel how twisted he had become because of the Necrosword.

I love an antagonist who you can relate with and he’s undoubtedly one of the most relatable MCU antagonists to date.

But since this is a spoiler review I’ve got to talk about that incredible ending. An ending that made me cry so hard it felt like I was watching Endgame.

Of course, I’m referring to Jane Foster’s death. As someone who is somewhat familiar with Mighty Thor’s storyline the choice to kill her off after one movie was utterly mind-blowing. And yet, it made a lot of sense as well.

For her to take this powerful journey with Thor was not only special but it also provided Thor the character development he needed as well. With Gorr dying Thor decided to take Gorr’s daughter as his own and honestly, I didn’t know I needed Thor to be a dad until that happened.

With the ending finally bringing the full power of the title to fruition my cheeks were entirely wet. It was such a powerful and heartwarming moment.

Everything Else I Loved

I loved all of the cameos and easter eggs, the city with all of the gods is going to be super fun to examine when I watch it again, the humor was fantastic and yes, those screaming goats are next-level funny. The Shadow Realm was such a visually masterful scene too, by the way. There were a lot of moments where the film just looked so good!

Despite the fact that the film has become polarizing for some and has garnered more negative press than positive I want Taika Waititi back for a fifth film. He understands Thor inside and out and now we’ve got Hercules in the situation!

Oh yes, I’m so excited for Hercules. I haven’t watched Ted Lasso but considering how perfect Brett Goldstein looked as the character I am very elated about this casting choice.

Tomorrow I will be sharing my ranking of the film but until then, yes, I love this movie and I can’t wait to watch it again on Disney+.

Sky Cinema Unwraps New Trailer For This Is Christmas

Meet The Cast And Crew of Willow